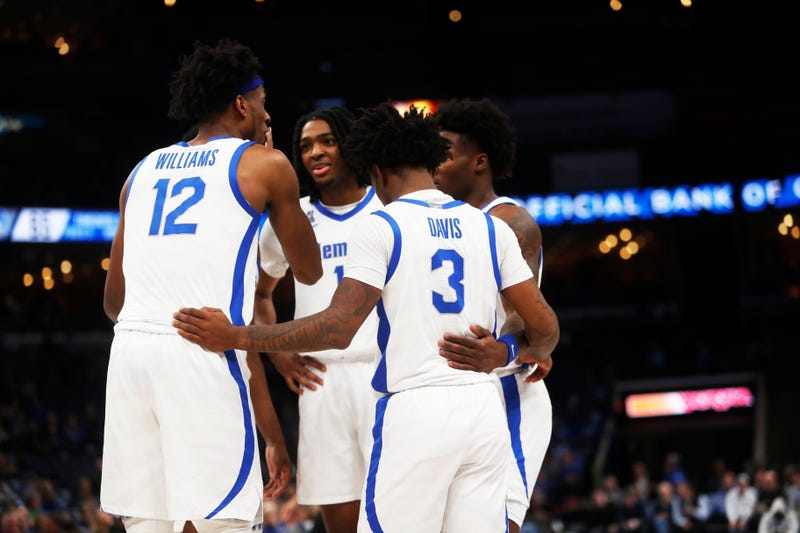 Williams added 15 rebounds and three steals for the Tigers (14-5, 4-2 American Athletic Conference). Kendric Davis scored 20 points while shooting 6 for 10 (4 for 5 from 3-point range) and 4 of 4 from the free throw line, and added five assists. Keonte Kennedy shot 6 for 10, including 4 for 6 from beyond the arc to finish with 16 points.

Memphis (14-5, 4-2 American Athletic Conference) extended its home winning streak to 15 games and have now won 18 of its last 19 league games inside the Forum.

Fifth-year forward DeAndre Williams led the charge for the Tigers, scoring a season high 29 points on an efficient 9-of-13 shooting to go along with a career high-tying 15 rebounds.

Senior Keonte Kennedy had his best night as a Tigers, producing 16 points on 4-of-6 shooting from long range.

Trailing 22-15 with 7:05 left in the first half, the Tigers’ offense finally got rolling. Chandler Lawson and Williams finished off back-to-back possessions with a steal on one end and a bucket on the other before Elijah McCadden and Davis each knocked down a three to help put Memphis back in front 29-23 behind a 14-1 run.

In the final minute of the half, Johnathan Williams connected on the sixth triple of the night for the Tigers to send them into the halftime break with a 36-30 lead.

Memphis shot 46 percent in the opening 20 minutes (12-26), including 43 percent from long distance (6-14). Davis scored 11 points in the half, while Williams nearly grabbed a double-double with 11 points and nine rebounds.

The Tigers never trailed in the second half after shooting 60.0 percent after the break (18-30) en route to the victory.

The Tigers led by as many as 15 points Thursday night.

UP NEXT
The Tigers go back on the road Sunday for a noon tip at Cincinnati on ESPN2 before coming back home next Thursday for a 6 p.m. blackout against SMU.

Memphis will continue its 1972-73 national runners-up celebration with bobblehead handouts of Billy Buford against the Mustangs.

Memphis used the starting lineup of Kendric Davis, DeAndre Williams, Keonte Kennedy, Elijah McCadden and Kaodirichi Akobundu-Ehiogu for the second-straight game.Memphis has used five different starting lineups in the 19 games this season.Memphis has won five-straight games against the Shockers and seven of the last eight matchups overall.The Tigers are on top in the all-time series, 17-12, and lead 12-3 at home.Memphis’ average margin of victory in the five-game winning streak is 16.0.Head coach Penny Hardaway is 7-1 against Wichita State in his head coaching career.The Tigers ended the game shooting 53.6 percent from the field, their fifth-best mark in a game this season.The Tigers are 7-1 in games this season when shooting 50-plus percent.The Tigers made a season-high 11 three-pointers in the win.It’s the most since draining 13 against Tennessee Tech on Nov. 9, 2021.Memphis won the battle on the boards (33-27) for just the second time in its last nine outings.DeAndre Williams recorded his 15th-straight game of double-digit scoring.The senior had his fifth 20-point game of the year and the 15th of his career.He also snatched his fifth double-double of the season and his sixth game of double-digit rebounds.Kaodirichi Akobundu-Ehiogu blocked five of the team’s seven stuffs. It’s his third game this season with five or more blocks.Kendric Davis moved into fourth all-time on the AAC’s career scoring list with 1,727 points. He is eight points from third place.He scored his 12th game of 20+ points this season and the 43rd of his career.Head coach Penny Hardaway won his 98th career game as a head coach.