Michael Thomas was one of the best wide receivers in the league in his first five seasons with the New Orleans Saints. He set an NFL record with 149 receptions in 2019 and was named the NFL Offensive Player of the Year.

The 29-year-old wideout missed time with an ankle injury in 2020 and underwent surgery last summer. Thomas missed the entire 2021 season due to a setback with that injury.

Now, Thomas is back on the field and working towards game action.

WWL's Jeff Nowak and Steve Geller discussed Thomas' progression and what they've seen from him in training camp on Audacy's Inside Black & Gold podcast.

“There’s a point where the training wheels have to come off, the bubble wrap has to come off, and you just have to trust that this guy can go play football and not get hurt,” Nowak said (5:25 in player above). “That’s always, to me, the most difficult part of trying to bring someone back from injury because there’s a mental element there where you’re just not comfortable with your own body. You’re not comfortable with the fact that you can stay healthy.”

Thomas has seen a bit of physicality in camp, including a hit from Quenton Meeks, who had just been signed that day. It’s all a part of the process for the wide receiver.

“That’s part of it. That’s part of the game itself. There has to be that physicality element when taking off the training wheels. We’ve seen them doing the ‘ramping up’ process with Mike T,” Geller said. “For a long time,” Nowak chimed in.

“Everything since the start of training camp has been above where I thought Michael Thomas would’ve been,” Geller continued. “There’s definitely been a huge positive with him this entire camp.”

There were some concerns that Thomas’ absences at OTAs and minicamp would leak into training camp, but that hasn’t been the case. He’s just been getting a few scheduled off days here and there

Given Thomas’ injury and where he’s at it’s only fair to grade his performance on a curve. He’s had a few drops and a few plays where the defense got the best of him.

“I think if you had this practice in 2019, Mike would say it was a terrible day. Down the road you might wanna see him execute better on some of these routes, but that’s just not what we’re going to talk about right now because the most important thing – the only thing that matters – is getting him back on the field,” Nowak said. “And once you do that, then you can start to worry about the results.” 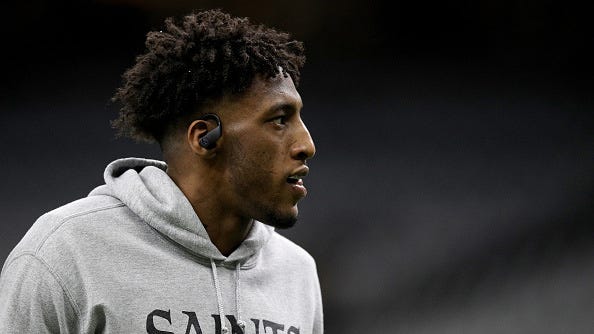