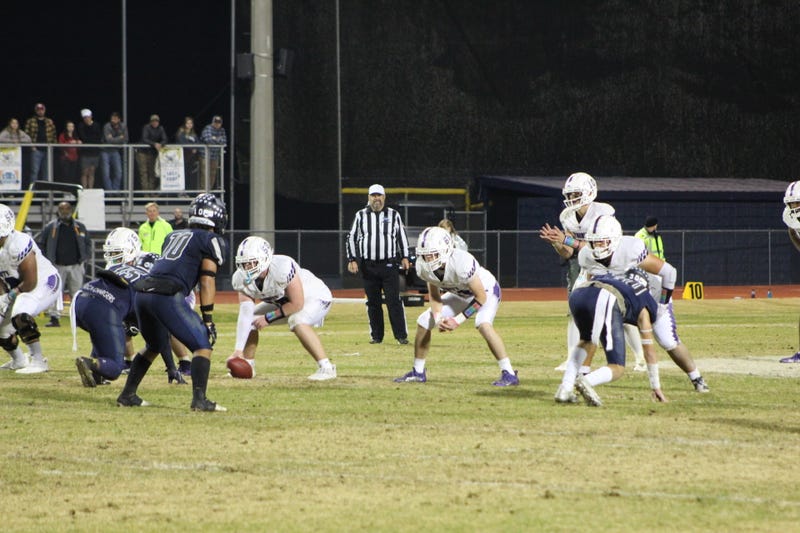 For a moment, as Eagle’s Landing Christian took a 35-28 lead with 1:30 to play, it appeared that Trinity Christian’s undefeated season was about to come to an end. However, the Lions had other plans to cap off this thriller in the Class-A Private playoffs and clinch their spot in the state title game.

In less than a minute, Trinity quarterback David Dallas moved his squad deep into ELCA territory and found a receiver in the end zone for what appeared to be a game-tying touchdown, but it was negated by a penalty. On the very next play, Dallas found Bryce Wilcox who carried a couple of Chargers with him into the end zone to send the game to overtime at 35-35.

The two teams traded touchdowns in the opening overtime period with ELCA converting a critical 4th and goal to send the game to 2OT. In the next frame, the Chargers would settle for a field goal to take a 45-42 lead before giving the ball back to Dallas and the Lion offense.

The home crowd was stunned and the traveling Trinity faithful erupted as Dallas then found Aaron Gates for the game-winning touchdown.

When the celebration came to end, the two teams huddled together for a moment to express their mutual respect after a hard-fought heavyweight fight. Speaking to the gathered teams, Trinity head coach Kenny Dallas shared that ELCA, a fixture of the Class-A championship game in years past, is the standard that the Lions have worked to emulate. Dallas, who previously spent three seasons as the defensive coordinator at ELCA, enjoyed the victory as both a coach and a proud father.

“I couldn’t be more proud of our kids, but I have to say this right now. I don’t ever put a ‘daddy hat on,' I’m a head coach, but my son is our quarterback. He was a freaking stud tonight. When it all mattered, the ball was in his hands. He made unbelievable decisions. That kid is a leader, he’s worked his butt off his whole life…That dude, David Dallas, was a man, a leader, everything we needed him to be," the winning coach said.

It was a family affair for Trinity Christian as Joshua Dallas had a key interception in the end zone to deny an ELCA scoring opportunity, keeping the game tied at 14-14 at halftime.

ELCA fought to the end in a rematch of a game that they lost 34-3 in the regular season and their season comes to an end in the semifinals.

The Lions will play another familiar opponent next week in the title game as they’ll take on Prince Avenue in a rematch of the 2020 state championship game.