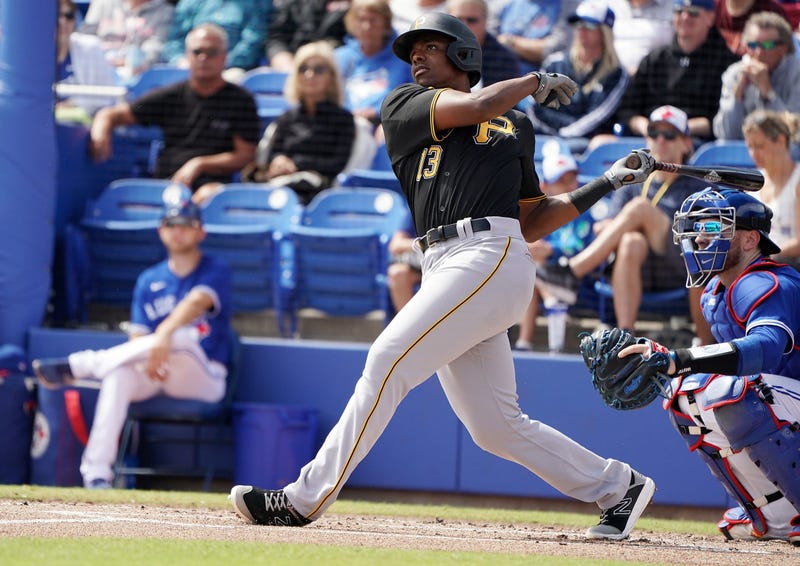 A strong Gulf wind was blowing and baseballs were flying out of TD Ballpark in Dunedin Friday as the Pirates hit 7 home runs to beat the Blue Jays, 19-13.

The Pirates feasted off Chase Anderson for the second time in 5 days, hitting 3 of homers off him. Third baseman Ke'Bryan Hayes hit the first one and is hitting .350 in Grapefruit League games

"He's had a good spring at the plate, he's swinging the bat, swinging the bat aggressively," said Manager Derek Shelton, who agreed that Hayes is "an elite defender.," living up to his reputation coming up through the minors.

Colin Moran also homered while starting at first base, while Jose Osuna played right field. "We just want to give (potential utility) guys different looks," Shelton said, "because you don't want to get to March 26th and something surprises a player; if that's the case that's on me. I don't want my players to be unprepared."

Shelton also believes there may be more pinch-hitters and double switches with the new "3 batter minimum" for relievers which be implement in Grapefruit League games starting March 12th.

Cole Tucker also homered off Anderson, but had a forgettable day at shortstop, bobbling a slowly-hit bouncer and losing a pop fly that fell behind him and helped contributed to Joe Musgrove's early exit.

In the meantime, Chris Archer was impressive after his first spring start was pushed back due to neck tightness. He completed his desired 2 innings, 4 strikeouts, 1 walk, 1 hit, a ahift-beating ground ball. He froze his final batter on a 94 MPH fastball.

The Pirates scored 6 more runs in the eighth as Will Craig and Jared Oliva homered and while the Bucs battered the Toronto bullpen, Edgar Santana and Blake Cederlind each pitched a perfect inning. Since that woujld have tto easy, Nick mears gave up another home in the 9th but the Pirates managed to hold the 9-run lead.

After 2 straight games on the road, the Bucs return "home" Saturday to take on the Yankees at LECOM Park. After 4 relief appearances, Chris Stratton is scheduled to start with Richard Rodriguez, Michael rtisedFeliz, Dovydas Neverauskus, Cody Ponce and lefthander Robbie Erlin also slated to pitch. Here that game - plus  Siunday's against the Rays in Port Charlotte - on 93.7 The Fan. Coverage for both at 1:00.