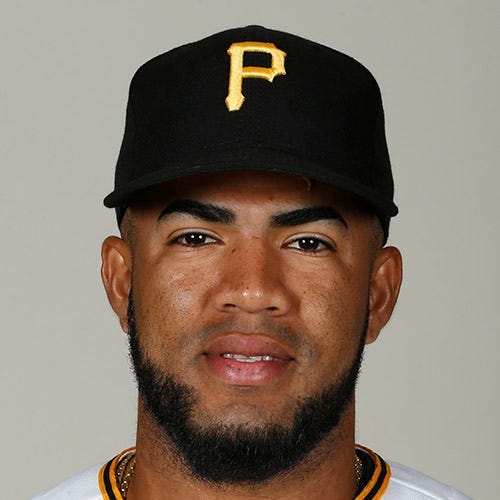 PITTSBURGH (93.7 The Fan) - Dario Agrazal is scheduled to make his Major League Debut Saturday night for the Pittsburgh Pirates against the Miami Marlins.

Cory Giger from The Altoona Mirror joined Tab Douglas Saturday afternoon to give us a scouting report for Agrazal ahead of his start.

Agrazal is 4-2 with a 3.10 ERA in 8 starts this season with Triple-A Indianapolis.  Agrazal has stuck out 39, has walked only 10 and has only given up 4 home runs this season for the Indians.

An interesting stat for Agrazal, that some may view as conerning, is he has allowed more hits than innings pitched in his minor league career.

"But, I'll counter it by saying he's got good control, he's got about a 4.5 to 1 strkeout to walk ratio," said Giger. "Which is good because when you're allowing more hits than inning's pitched...Dario Agrazal doesn't walk a lot of guys and he's able to avoid disaster even if he gives up a good number of hits."

Steven Brault has been the Pirates most consistent starting pitcher since Jameson Taillon went on the injured list and Giger likes what he has seen from Brault.

"Watching that game on T.V last night, he got out of those early inning jams by throwing some phenomenal pitches, phenomenal strikes down and away in the strike zone to get some swings and misses," said Giger. "Steven Brault knows how to pitch, Steven Brault doesn't have phenomenal stuff, but he is really, really smart."

Giger can see Brault pitching for a long time in the major league's and being effective because he is really smart, knows how to pitch and is a great athlete.

With what we have seen from Tyler Glasnow and other former Pirates pitchers after they leave the organization, Is Ray Searage's seat starting to get warm or should more blame be put on the pitcher's. With Glasnow, Giger says he would put more blame on the pitcher.

Giger says that Mitch Keller compares more favorably to Jameson Taillon. He call's him a very intelligent, confident and very mature player on and off the field.

"Mitch Keller gets hit hard sometimes, that would be my concern," said Giger. "Mitch Keller for as good as stuff as he has finds too much of the strike zone at times and can really get crushed...I do have a lot of confidence in Mitch Keller the person, the mature kid, smart kid, good upbringing, good family and I think a lot of that can come into play that will help him get through any struggles that he might have over the first year to avoid the complete kind of collapse that Tyler Glasnow had when he was starting for the Pirates a couple years ago."

They wrap up the interview discussing how Bryan Reynolds has burst onto the major league scene this season and has the ability to be something really special for the Pirates.

Also, they take a look ahead to trade deadline and who the Pirates should be looking at and who they could have on the trading block to improve the depth of the starting pitching and give more playing time to the young guys that will be with the team next year and the next few years.

And because of the way that Josh Bell has began to thrive this year, the Pirates have started to play Will Craig in the outfield and Corey Giger is a big fan of that idea.

"I like it, I do like it, Will Craig, he's got power man," said Giger. "We all know the Pirates system has just been void of power for a good while and if they can develop a power bat, first round pick, Will Craig is a big, strong, strapping kid, won the home run derby in the Eastern League last year, that kid can really drive the ball, he's a good athlete, he can move around the field."

Giger also wouldn't be surprised if Third Baseman Hunter Owen started to be moved around the field this season in Altoona because just like Josh Bell at first base, no one is going to supplant Ke'Bryan Hayes at third base for awhile with the Pirates.