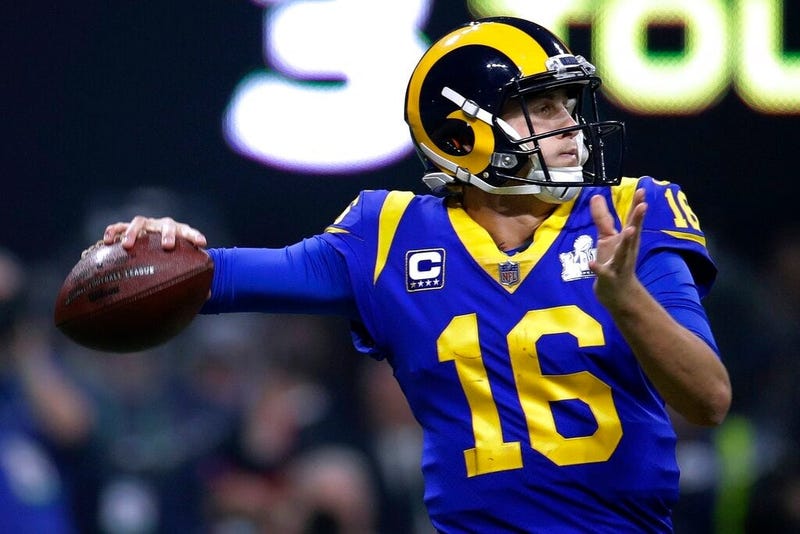 THOUSAND OAKS, Calif. (AP) — The Los Angeles Rams have locked down Jared Goff through the 2020 season, and they intend to keep their franchise quarterback around for a whole lot longer.

"We just want to make sure there's clarity on how great we feel about him leading our team for many years to come," McVay said. "He's only getting better and better, and as he continues to accumulate experience, we feel so good about our quarterback position with him leading the way."

Goff was fourth in the NFL last season with 4,688 yards passing along with 32 touchdowns and 12 interceptions. He led the Rams to their first NFC championship in 17 years, but went 19 of 38 for 229 yards in a mediocre Super Bowl while Los Angeles failed to score a touchdown against New England.

That disappointment apparently had no effect on the Rams' opinion of Goff, who has earned two Pro Bowl selections while leading the Rams to 24 regular-season victories over the past two years. Goff has given much of the credit for his evolution to McVay, but the 33-year-old coach returns the praise to his 24-year-old passer.

"It really provides a rare opportunity for myself, as he and I are really growing together," McVay said. "He's going into his fourth year, we're going into our third year working together, and I couldn't be more excited."

The Rams already bet a large portion of their future on Goff when they traded up with Tennessee to get the No. 1 overall pick in the 2016 draft, and the Bay Area native has grown into one of the NFL's most prolific passers during McVay's two years in charge.

The Rams lead the league in victories and scoring over McVay's two seasons with Goff, who bounced back from a trying rookie year under Jeff Fisher's staff to become a prodigious producer. After infamously going 0-7 as a rookie starter with five touchdown passes and seven interceptions, Goff teamed up with McVay and promptly passed for 3,804 yards and 28 touchdowns in 2017.

"A few years ago, we moved up to get him," Snead said. "Three years later, (after) him helping us win two divisions, win a conference championship, we probably would have given an extra pick — don't tell the Titans that — if we had known that was going to occur."

Goff will play for a $4.26 million salary in the upcoming season before getting an $18 million raise next year. His next deal is likely to make him exponentially richer, but the Rams and Goff express no urgency to get it done now.

When asked about his long-term contract situation last week, Goff said it was "not on my mind at all. I know the deal and understand that I hired an agent for that reason. Things always work out. If you continue to play well, it will work itself out."

Rams chief operating officer Kevin Demoff said the team hasn't opened discussions with Goff about a long-term deal, but the relationship between the quarterback and the front office is clearly harmonious.

The Rams have extended lucrative deals to several key players over the past year in an attempt to cement the cornerstones of their two-year run of success under McVay. Running back Todd Gurley and receiver Brandin Cooks agreed to multiyear contracts last summer shortly before All-Pro defensive tackle Aaron Donald got a six-year, $135 million deal with $87 million guaranteed.

Along with his on-field exploits, Goff will be a key figure in selling the Rams' move into their multibillion-dollar stadium complex in Inglewood in 2020.

In fact, Goff already completed the first pass in the under-construction stadium's history when he threw a perfect spiral to a worker on the second floor of the arena during the Rams' team tour of the site last June.

"It's good to know that that won't be the only completion he has in the new stadium," Demoff said with a laugh. "He'll actually get to throw to real teammates as well on an actual field."