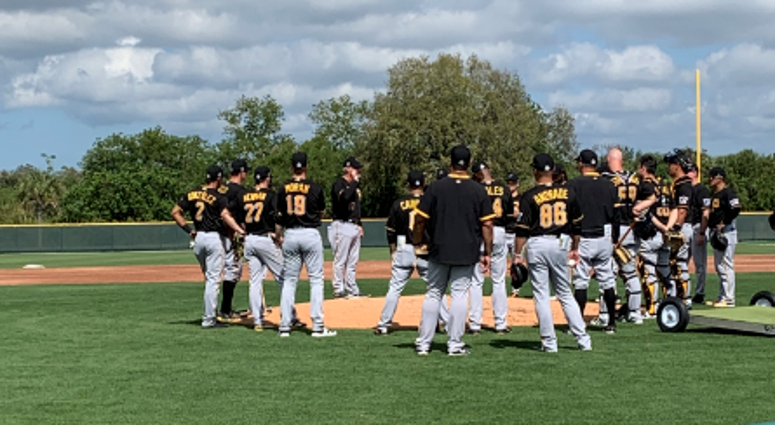 BRADENTON (93.7 The FAN) - You'll hear Derek Shelton talk about how long he has waited for this opportunity to be the manager of a Major League Baseball team and today, he held court with his full team for the first time and addressed them as a group.

"You hope it's impactful,": Shelton said about what he said to the team.  "You hope the message is impactful and more importantly that the message is genuine and they know.  It's not only being able to speak it in there, but to be able to get out here and live it."

So how does he think it went?

"I hope good!  You're asking the wrong guy, I'm the one who delivered it."

So I took it upon myself to go and get some feedback on how it went since Shelton himself said he's the wrong guy to ask.

"One of his quotes has been 'You worked too hard and way too long to not have fun in this game,' and it's been a great first week so far, a great first day and I'm looking forward to the rest of spring training."

General Manager Ben Cherington also met with the media today and was asked about Shelton's address.

"We talked about it a little before," Cherington told us.  "I think the main thing was practicing with intent and giving ourselves a chance to build trust, everyone in that room, and that's not something that happens because we say it's going to happen.  You have to be intentional about that too."

And as we keep hearing from everyone around the Pirates, the idea of having fun was brought up.

"He genuinely wants guys to have fun while they're working really hard.  I think those were the main themes."

Click the audio below to hear more from Shelton on his first day working with the full squad.

sports
Wayne Gretzky resells mansion that once belonged to Lenny Dykstra for $17.6 million
sports
Alex Rodriguez ownership group has not closed deal on Timberwolves purchase yet
sports
Fernando Tatis Jr. back on IL after testing positive for COVID-19
sports
Yankees 3B coach Phil Nevin tests positive for COVID-19, others in contact tracing
music
Lindsay Lohan honors late ‘Parent Trap’ costar Natasha Richardson on what would have been her 58th birthday
music
2021 Billboard Music Awards: Who will win 'Top Artist'?