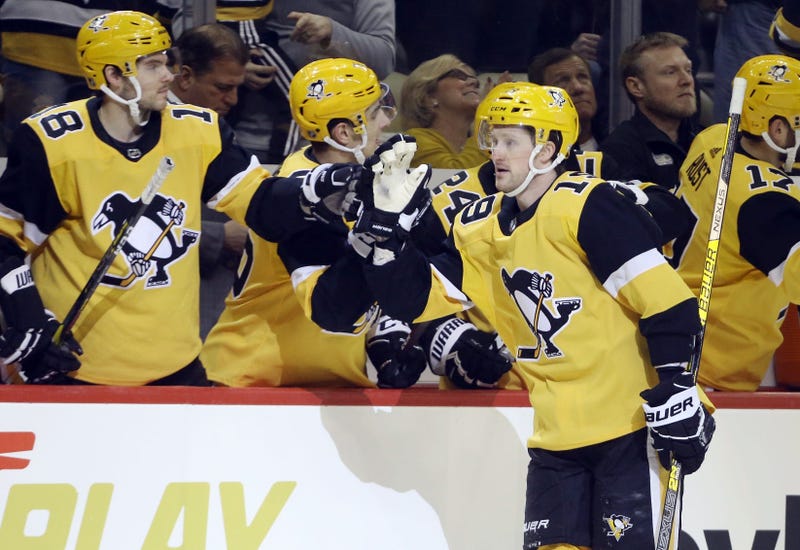 Sidney Crosby’s return from a two month absence due to surgery was spectacular. Four points, includuing a highlight reel play to set up a goal, and a 7-3 Penguins win over Minnesota, the team’s fourth straight.

But now comes the hard part for Pittsburgh. Not letting up.

“We know our division is extremely tight and we’ve got to continue playing the way we’ve played recently,” forward Brandon Tanev said following Wednesday’s practice. “We got a lot of energy back from Sid and he had a great game in his return. We’re going out there and playing a full 60 minutes as a group, a team.”

The Penguins’ next challenge will come Thursday night in Boston, where they will meet the equally impressive — albeit streaky — Bruins, who lead the Atlantic division.

After starting the season 20-3-5, the Bruins have gone 7-6-7 since, with a five-game, and a pair of three-game losing skids.

The Penguins hope that, with Crosby back, they can hop on a team that isn’t playing as sharp as they’d like. But the test, for Pittsburgh, is to not let Crosby do the work and become spectators.

“We don’t want to get too complacent out there,” rookie defenseman John Marino said. “If anything, we want to get Sid back as a confidence booster, not as something where we have a setback. Obviously he adds a whole other element to our team. He clearly makes our team a lot stronger.”

“Sid is a guy that understands,’ defenseman Kris Letang said. “Even before he was hurt, we were playing really well. We have to keep playing the same way. Every single guy in the room knows that they key to success is in the way we’ve been playing defense and being committed to executed our gameplan.”

Crosby, who missed a total of 28 games, watched his teammates rack up 18 wins during that stretch.

Despite losing several noteworthy players in addition to the team’s captain, that run has the Penguins just four points out of first place in the Metropolitan division, with a game in hand over division leading Washington.

“If you look at our division, the situation we’re in, missing they guys we’re missing, our work ethic and consistency has gotten us to this point,” Crosby said. “Just maintaining that is the most important thing.”

Offensively, it appears that the Penguins are relying on goal scoring to win. During this four-game stretch, Pittsburgh has racked up 19 goals. They scored 16 in a three-game winning streak against Nashville and Ottawa in late December.

But the team, to a man, references the unity on the defensive end of the rink as to why they’ve had so much success with the season more than halfway gone.