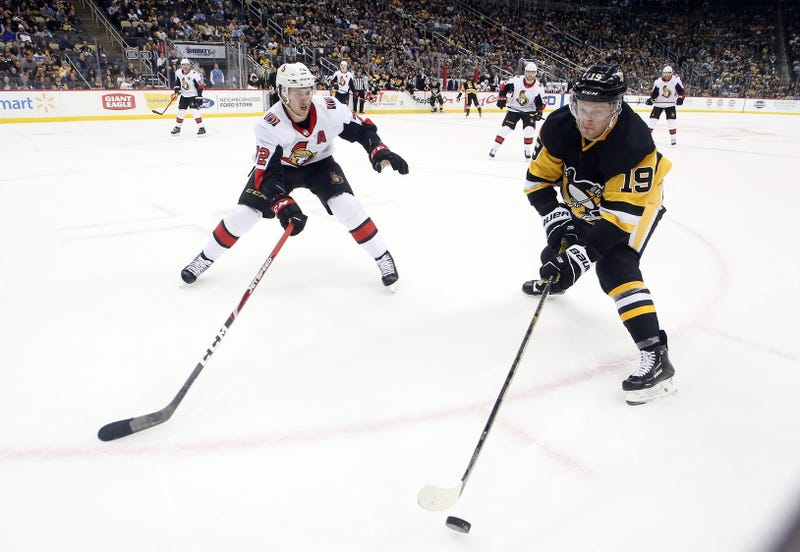 Penguins’ GM Jim Rutherford doubled down on skill and speed when he acquired Jason Zucker, Conor Sheary and Patrick Marleau over the last month.

He knew the return of Nick Bjugstad and the addition of Evan Rodrigues, coupled with forwards moving down the lineup to accommodate Zucker et al, should give Mike Sullivan speed on every line and the prospect of consistently rolling four lines for the first time in months.

That’s how the Penguins believe they can separate themselves from other teams in the Metro.

But as they host Carolina this afternoon, the separation they’re getting is between themselves and a possible first-place finish.

Since taking over the top spot in the division Feb. 18, they’ve lost seven of nine games and dropped five points behind the Capitals and Flyers in the Metro.

They’ve allowed an average of 3.78 goals per game in this span, regressing in the prevention of odd-man breaks; they’ve gotten zero – as in 0 – goals from “support” scorers on the third and fourth lines, and no I don’t count Patric Hornqvist as a depth scorer; and they’ve started poorly in a majority of those games, digging holes from which they can’t climb out.

These are all critical issues, and the only silver bullet solution for all of them is more intensity from Sullivan’s players, top to bottom.

You know, they kind they were lacking yesterday here against Washington.

That game served as a stark reminder of just how critical depth scoring can be, as fourth liners Nic Dowd and Richard Panik outscored the Penguins by themselves.

Alex Ovechkin got nothing, not even a shot; the NHL’s top scoring defenseman, John Carlson, got nothing.

The Capitals still won going away.

The last goal by a Pittsburgh depth scorer was from Teddy Blueger in the Feb. 18 win over Toronto that put the Penguins in first place.

The goal droughts here are meaningful.

It doesn’t help that Marleau is now in the worst goal drought of his career, no goals in 17 games, and that defenseman Justin Schultz, who has replaced Kris Letang on the first power play unit recently, has gone 26 games without a goal.

Schultz has scored one power play goal in his last 152 regular season games, which is hard to comprehend.

McCann’s drought, however, is the most troubling.

He’s been a streaky scorer since being acquired from Florida, but at the moment seems completely drained of confidence.

He’s missed on 51 consecutive shots in this 20-game drought, which includes 79 shot attempts.

He’s not a natural goal-scorer, but his speed and release should be yielding more production than the 12 even-strength goals he’s scored this season.

When your depth scorers are struggling, of course, you can make it up to some degree with better defensive play, but that’s clearly not happening.

During this nine-game stretch, Schultz and partner Jack Johnson are -8, and Letang is -7 and has not been playing well for weeks.

The Penguins have not reacted well to teams that aggressively forecheck them, although some of that miss is clearly on the forwards who are out of position or making bad decisions with the puck in the other two zones.

I’m not putting the blame on Sullivan for the poor starts.

It’s the responsibility of every player to get himself ready to play at this level, and the Penguins for the most part have not been ready to play on many nights going back more than a month.

There is time to recover, with 15 games left and 13 of them against division rivals. That includes one more each against the Flyers and Capitals. But the Penguins don’t have weeks to figure it out.

They’re in the midst of their busiest March schedule in 26 years, and they need solutions now.