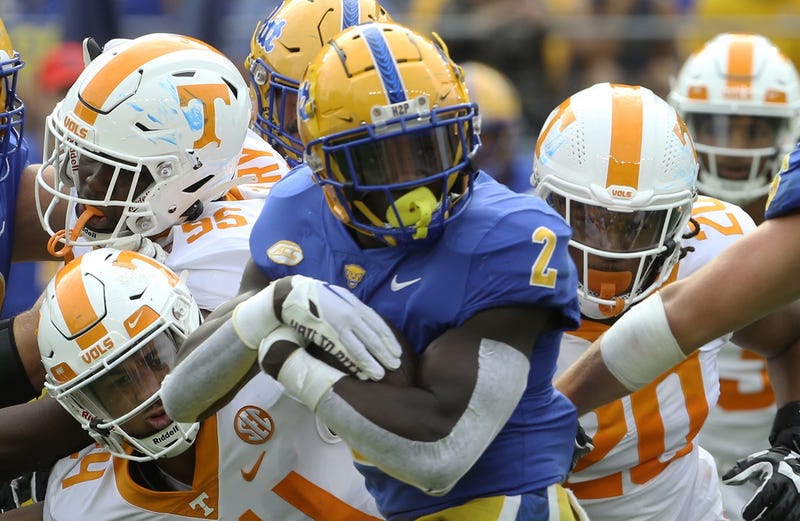 PITTSBURGH (93.7 The Fan) – With Rodney Hammond out due to injury, junior Israel Abanikanda is taking over the tailback position.

Panthers Running Backs Coach Andre Powell says Izzy is starting to feel it.  He’s more mature, taking better notes and the production is there.  With Western Michigan knowing Pitt was going to run, he gained 133 yards on 31 carries.  The previous game against Tennessee, he busted a 76-yard touchdown run to finish with 154 yards.   He caught the game-tying touchdown pass against West Virginia, grabbing a short pass and finding the end zone.

“Another thing as the game went, he got stronger.  You could tell the opponent was wearing down.  When you looked down at him, he wasn’t fatigued.”

It’s not just the maturity, but the shape Abanikanda is in.  Powell said the New York native is so ripped he has a 10-pack, describing it as ‘abs on top of abs’.  He said his tailback is a ‘strong dude’ and along with being naturally strong, he also has functional strength.

“In years past, we weren’t committed to the run,” Powell said.  “Last year we were better geared to throw the football.  The number of at bats he got, he wasn’t able to get all of those nuances.  He’s able to get those now.”

While Abanikanda is taking over, Daniel Carter is looking for more run.  He was the most improved offensive player coming out of Spring practices.  After scoring a couple of touchdowns the first few games, the redshirt junior believes his role will continue to increase.  He’s all for it.

Carter has 10 yards on four carries with a couple of first down conversions and a couple of touchdowns this year.  The 5’10”, 240 pounder has 96 career rushing yards and five total touchdowns.

“It feels good,” Carter said.  “The more opportunities I get, the more I can show.”

It’s where Pat Narduzzi was a three-year starting linebacker.  The University of Rhode Island is also where Narduzzi met Powell.  It’s also where Powell met his wife as he is quick to also mention.  The pair were together with the Rams and then reunited against at Pitt.

“He’s the same guy except he had abs,” Powell joked about what Narduzzi was like at Rhode Island.  “I know he was plugged in.  He stayed moving.  ‘Hey, let’s come in Saturday and paint the office’.  He was one thing after another.  I go to his house and he’s saying ‘look I cut a hole in my wall and put a closet in’.  He was always on the go.  He’s got a very active mind.”