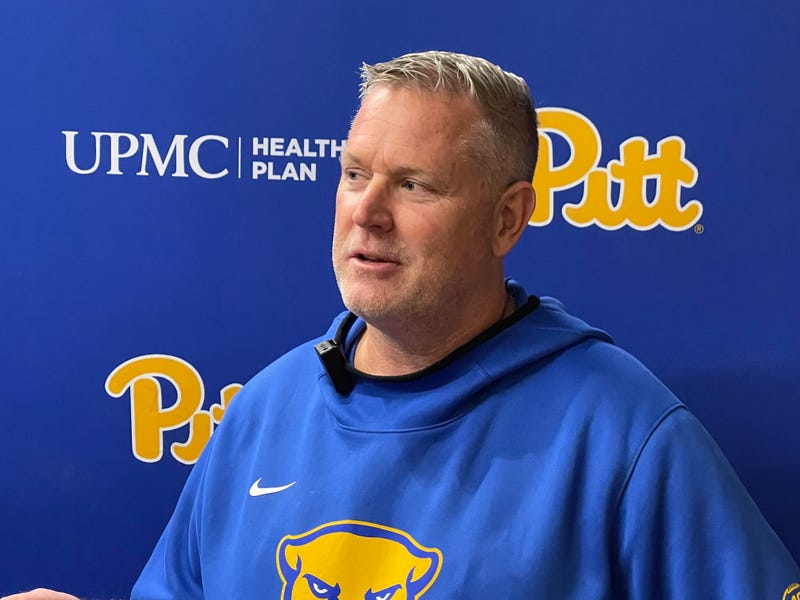 PITTSBURGH (93.7 The Fan) – They are top five in rushing yards and 12th in passing, Pitt Offensive Coordinator Frank Cignetti says they continue to strive for balance with a regular-season and bowl game still ahead.

“It starts with myself, it starts with the coaches and getting that execution better on game day,” Cignetti said Wednesday.

He said there are multiple reasons for struggles in the passing game. It could be a play call here, a missed throw there, a bad route or a series of other issues. He stated it’s a team game. They keep working on it and keep coaching trying to close the gap.

Cignetti said they are making progress, they are getting better even if we haven’t seen the consistency in the results or stats. In the last five games, Kedon Slovis hasn’t reached 200 yards in passing. He’s eighth in the ACC in passer efficiency and 10th with seven touchdown passes this season.

“I see it on the tape,” Cignetti said of Slovis’ improvement. “I see it at practice. You can see he knows what it looks like now. He understands the timing and rhythm of his eyes and his feet and the ball location. And the type of balls based on zone coverage and man coverage.”

“The only way you get better is to play the game. The more you play, the better you should get. With that, the results should get better.”

In his first season returning to Pitt as the offensive coordinator, Cignetti said it’s not just the pass game that’s had inconsistencies. He noted most of us miss a few mistakes in the running game where if one more thing was done they would have popped a few more long runs.

There are questions, however Cignetti did accomplish the goal Narduzzi set out of improving the run game. Israel Abanikanda will win the league rushing title and no one in all of FBS has more rushing touchdowns than the Panthers junior.

“It’s my first year here, I didn’t know a lot about them,” Cignetti said of his offense and specifically about Abanikanda. “Izzy is very talented. I was asked (at the beginning of the season), why Izzy? I said he can hit home runs.”

“He’s a joy to be around. He loves football, he has a positive outlook on it. He wants to get better. As a play-caller you love to be able to hand the ball to a running back that can make big things happen. I’m really happy and proud of Izzy.”

The Panthers will lose some starting offensive linemen and a number of players from this year’s offense haven’t committed to staying at Pitt beyond this season, most notably Slovis. As he searches for consistency, Cignetti may go into next year with a mostly new roster.