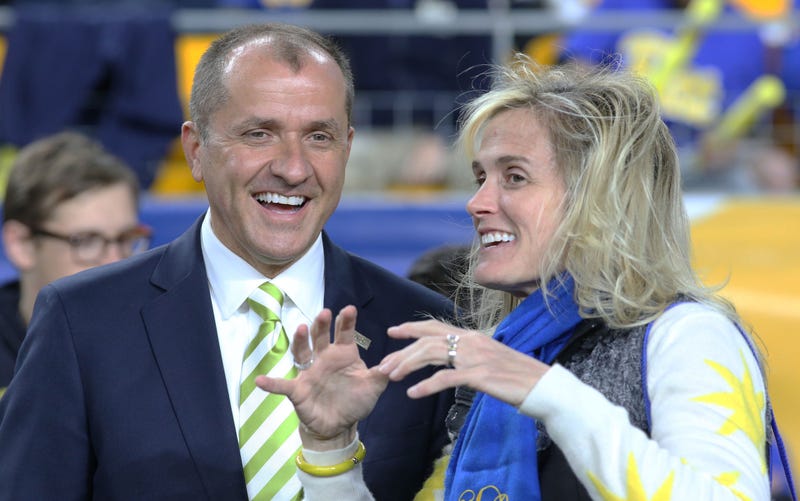 PITTSBURGH (93.7 The Fan) – Another earthquake hit college football Thursday and much like the actual natural disaster, the landscape won’t go back. It will either be built into something better or a town left in ruins.

Such now are the decisions for a couple dozen schools previously part of the Power 5 that is quickly becoming the Big 2.  There are schools that have the resources and are attractive potential members for the new super conferences-Clemson, Miami, Florida State, Oklahoma State, TCU, Oregon, Washington.  There are those without football success but have huge basketball traditions-Kansas, Duke, UNC, Arizona and recent national champs Baylor and Virginia.  Then there is Notre Dame, no single program could alter the future at this point more than the Irish.

If you look at the speculated new conferences, few if any national stories show Pitt, or West Virginia, as part of these future mega leagues.  But don’t count out Pitt just yet.

They don’t have the biggest national name recognition, but their football program is growing.  They got on the Heisman stage in 2021, another Biletnikoff winner and the best player in the NFL is a proud alum.  While Pittsburgh isn’t the television market it once was, it’s still at worst a mid-major market.  Yes, the Big 10 does already have Penn State, but the conference has multiple teams in Michigan, Indiana, Illinois and Los Angeles.

She has extensive ties to the Big 10 including a friendship with Ohio State Athletic Director Gene Smith, arguably one of the 10 most influential people in college sports.  Smith was her mentor when she worked for OSU and has maintained a relationship spanning the years since.  Lyke even worked on-air for the Big 10 Network.

There will never be a more important time to use those relationships than now.  Pitt needs to find a way in the game.

Why the need to join?

An argument is made, why do you need to join the likely two future super-conferences?

I think you know the answer to that before it’s even typed, schools need the cash.  They need it to fund their athletic departments.  They need it to keep their facilities cutting edge (like what has happened at the Petersen Sports Complex and the new Victory Heights project).  In the time of NIL, the competition for athletes goes beyond what it ever has been.  If you don’t have the backing of a multitude of big money endorsers, you need something else to be your hook—facilities and successful coaches with a track record of getting players to the next level—those are two big ones, and each cost multi-millions every year.

The estimates for the new Big 10 contract work out to $71 million per school, per year.  That funding is critical not just for the football program, but every other sport.

Not being a part of the Big 2 doesn’t mean the end of Pitt football.  I’m not trying to paint that picture, but the perception-even if it’s not the full reality-would be they are playing at a different level.  There would still be a television contract, but not to the same level as the potential Big 2.  It would be more regional advertising, which would bring in money, but not to the same amounts.

The impact would be felt throughout the entire athletic department and the quality every other non-revenue sport.

Much like Texas and Oklahoma leaving the Big 12 wasn’t the last shoe to drop, neither is USC and UCLA to the Big 10.