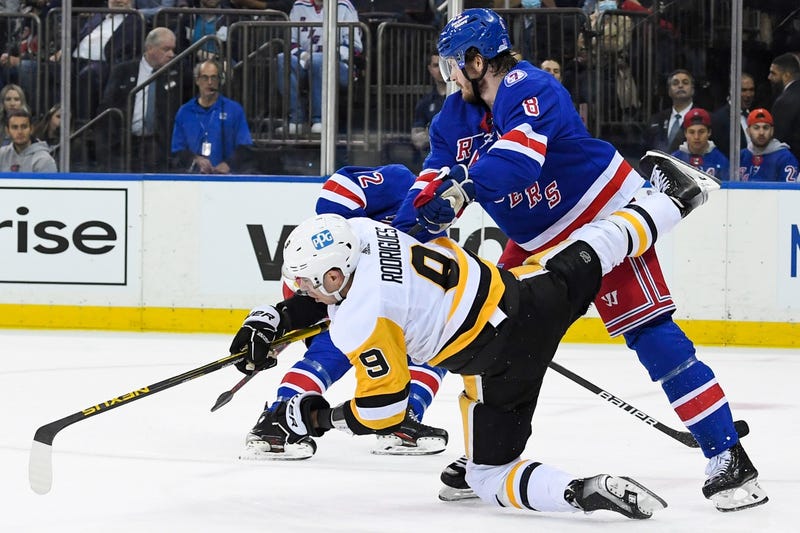 PITTSBURGH (93.7 The Fan) – Pens lost the game, there will be another. Pens lost Sidney Crosby, there is no other. Rangers stay alive with a 5-3 win at Madison Square Garden on Wednesday night.

Crosby injured in the middle of the second period off an elbow from Jason Trouba at 9:15 of the second period.  Pens Head Coach Mike Sullivan would only say that Crosby is still being evaluated for an upper body injury.  As for his thoughts on the hit?

“Did you see the hit?” Sullivan asked back to Dan Kingerski of Pittsburgh Hockey Now.  “You probably have the same opinion I do.”

At the time the Pens led 2-0 and the Rangers would go on to score three goals in 2:42 minutes.  Sullivan said it was about their lack of wall play, but you could team it wasn’t the same with Crosby out.

Guentzel would be that man answering the third goal 13 seconds later, his second goal of the game.  However after ending the second period 3-3, the Rangers take advantage of a power play on a broken play, Filip Chytil spin-o-rama on a loose puck early in the third period.  Ryan Lindgren, back from injury, would add an empty-netter with 16 seconds left.

“He’s a huge part of our team,” said Pens defenseman Marcus Pettersson of losing Crosby.  “We’ve shown in the past we can play without our stars.  We need to do a better job of killing that momentum.  Getting pucks deep, playing better in the D-zone.  They got a lot of energy from that.  We should be able to bounce back from that.”

“Sid is a real important player for us,” said Pens center Teddy Blueger.  “Throughout the course of the year we’ve played without him and done pretty well, battled through injuries.  I don’t think it’s anything we can’t overcome.”

“Geno is a generational talent,” Sullivan said.  “He’s a real capable guy.  I thought he had a strong game tonight.  We feel like we are deep at that position and we have what it takes to win regardless of who is in our lineup.”

“Geno is an important guy for us.  That combination, Sid and Geno, have been two of the best in the league for 15-plus years.  When one of them is out, the other one steps up.  That’s been my experience since I’ve been here.”

“We knew the hardest part of a series is closing out,” Pettersson said.  “Stay positive, keep our heads up and know that we are going back to our building and it’s going to be fun playing there.”

Pens are scheduled to practice in Pittsburgh on Thursday and then host Game 6 Friday night at 7p.