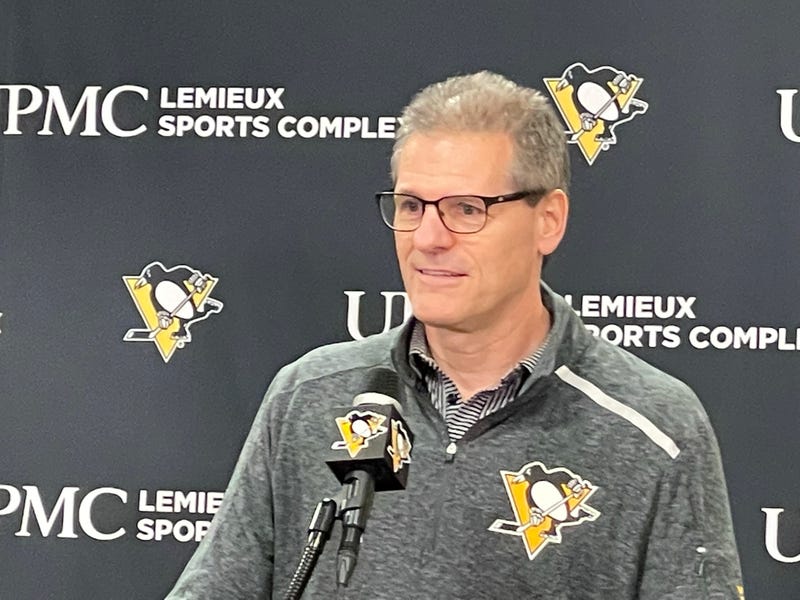 PITTSBURGH (93.7 The Fan) – Pens General Manager Ron Hextall equated the signing of forward Bryan Rust to a six-year contract Saturday as the first piece of a puzzle. Now they are working on the two big pieces and Hextall confirmed they have had discussions with Evgeni Malkin and Kris Letang and he wants to keep both.

“I don’t negotiate through the media,” Hextall said Monday.  “We have had discussions very recently and will continue to have those discussions.  We would like to sign both players.”

Hextall said both are still performing at a high level and noted finances are playing a factor in these discussions.  Nine Pens who played in the playoffs are either unrestricted or restricted free agents and that’s after signing Rust.

“We have some issues in areas we have to work through in terms of the salary cap,” Hextall said.  “Everything has to match up.  It’s a puzzle right now and I wish we had more pieces in place to make it a little more clear.  It’s hard to even venture a guess to see where it would end up.  We have numerous outlines of teams we would like to have, but obviously the numbers matter.  We will continue to work with those guys and hopefully come to an agreement.  I have no timeline.”

He said the way they are putting that puzzle together is working from the top down and joked he wished he had more money available.  So, they will continue conversations with Malkin and Letang because if they are able to lock in a contract with either, both or neither, that will impact the other pieces they are able to sign or acquire.

“I think if you look at them individually,” Hextall said.  “They’ve both been here 16 years.  Geno has obviously been a great player, certainly one of the best players in the history of the game.  We would like to keep him as a Pittsburgh Penguin for the rest of his career.  In a perfect world, Geno retires a Penguin.”

“I think Letang is the same.  These two are generational players.  They don’t come along very often.  We would like to keep them through the rest of their careers.”

Hextall said he and the new owners, Fenway Sports Group, have the same plan of ‘trying to win the Stanley Cup’ right now.  There is no talk of rebuild or retool only the desire to reunite.