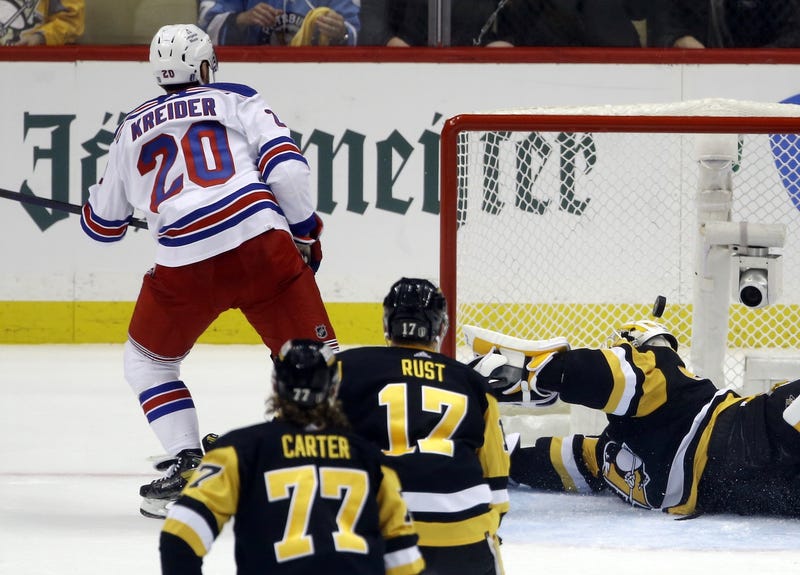 PITTSBURGH (93.7 The Fan) – How does this Penguins team turn it around? They’ve blown 2-0 leads in Game 5 and Game 6 and now play a series-ending Game 7 on the road.

There is no assurance Sidney Crosby returns after being hurt in Game 5, forward Rickard Rakell remains day-to-day, not yet working in line rushes after an injury in Game 1.  Defenseman Brian Dumoulin hasn’t skated since his injury and forward Brian Boyle went down on Friday night.

“I think it’s the only option,” said Pens defenseman Mike Matheson of bouncing back.  “Either we feel sorry and come into the rink (Saturday) and mope around and head off to New York and see what happens in the game.  That doesn’t sound like a very fun option to me.  I don’t think anyone in the dressing room feels that way.”

“That’s what I said to the players after the game, nothing has changed,” said Pens Head Coach Mike Sullivan.  “We have to be able to move by this.  You got to have a short memory at this time of year and win one game.  We are very capable.”

If there is an area to build on it’s their even strength play, but not easy to just ignore how flat-out horrible they’ve been on special teams.  Allowing not only a pair of power play goals Friday, but their power play so bad it’s an advantage for New York.

“We have been really good five-on-five,” Sullivan said.  “We have played really good hockey and competing out there.  We know we are capable of being better.  There are solutions within our dressing room.  We have to bring that same level of compete for Game 7.”

Matheson says they have the ability to just forget about what happened the last two games and be right for the winner-takes-all contest in New York on Sunday night.

“The only option is to just park what happened,” Matheson said.  “Regardless of how the games have gone, if we were down 3-1 and came back to make it 3-3 and heading off to a Game 7.  We would be expected to feel a certain way and that wouldn’t help us either going into Game 7.  Game 7s are crazy games where anything can happen.  It’s up to us to bring our best and see what happens.”

“No one said it was going to be easy,” said defenseman Kris Letang.  “They are a real good team.  It’s a race to four.  We have to regroup, stay positive and get the job done.”

There is a chance Tristan Jarry returns.  The Pens number one goaltender broke his foot on April 14 and hasn’t played since.  However, Jarry went through a full morning practice on Friday and could be an option.

In team history, the Pens have lost games five and six in a playoff series when up three games to one and both times also lost game seven.  On the flip side, the Pens have never lost a Game 7 on the road.

“We will be ready for Game 7,” Sullivan vowed.  “When you get in one game, anything can happen.  We have to make sure we bring the right mindset, the right positive attitude, we bring a lot of energy.  Then it is going to boil down to execution.  I think we have enough to win.”

“I still believe in the group we have.”