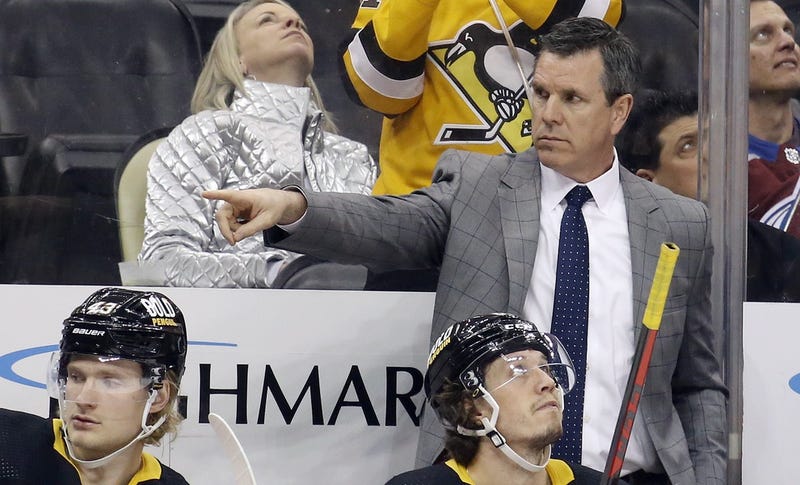 PITTSBURGH (93.7 The Fan) – Pens head coach Mike Sullivan did not have an update on injured captain Sidney Crosby Thursday morning. He would only reaffirm that he’s dealing with an upper-body injury, didn’t use the word ‘concussion’. Sullivan would not offer any more information.

The Pens head coach also refused to call for supplemental discipline from the NHL for Jacob Trouba’s hit on Crosby.

“It’s not my responsibility to share my opinion, that’s the league’s job,” Sullivan said.

The reverse angle of the Crosby-Trouba hit certainly looks much different than the video from the regular perspective: pic.twitter.com/I5HITmznhI

Former Pens and Rangers forward Mike Rupp tweets there was no intent on the hit, but believes there will be discipline.

My opinion on Trouba / Crosby:
> Trouba is trying to get stick on puck.
> He isn't targeting the head. There is head contact, but also substantial body contact.
> His stick gets wrapped up in 87, which makes top hand on his stick go up - looking like an elbow.
Unfortunate result. pic.twitter.com/tzkcLiyrdb

Unfortunately for @penguins fans I don’t feel this warrants a suspension. A minor for roughing or elbowing could have been called on the play but nothing more. And Sidney Crosby is one of my all time favorite players. #nyr #penquins

Part of the talk from Sullivan could be just to keep his team from reading what he might consider excuses. Try to get his team to move forward with the ‘next man up’ mentality instead of dwelling on the hit. From the look on his face and how he answered the question after the game, you could tell Sullivan believed there was intent.

"We're not going to get ahead of ourselves,” Sullivan said. “We're going to take each day as it comes here. But regardless of what our lineup looks like each and every night, we believe we have what it takes to win."

Sullivan said goalie Tristan Jarry, who has skated for three straight days and joined the team’s optional skate on Wednesday, is ‘making significant progress’.  Adding they are really encouraged and will take each day as it comes.

Forward Rickard Rakell, knocked out of the series in the first period of Game 1 due to a high hit, remains day-to-day.  Defenseman Brian Dumoulin has yet to return to skating.

The Pens cancelled practice on Thursday deciding to stay in New York overnight on Wednesday.  Game 6 is Friday at 7p at PPG Paints Arena.