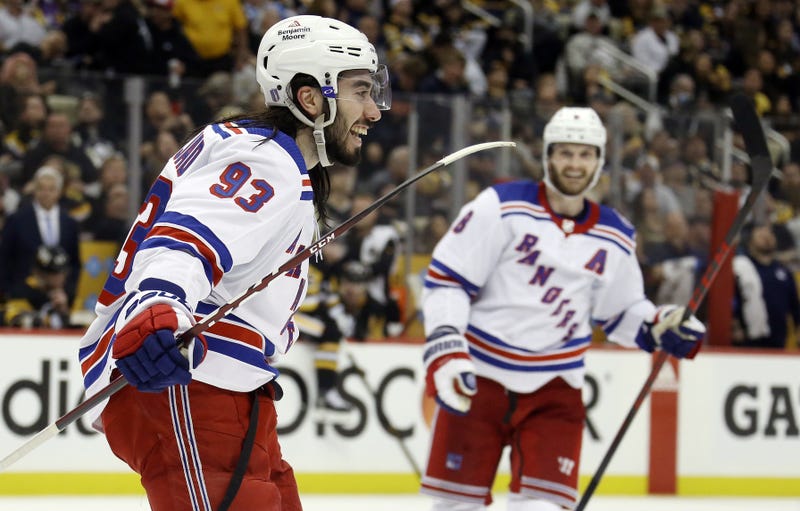 PITTSBURGH (93.7 The Fan) – Yet another two-nothing lead blown Friday night. Now the Pens lead in the series is gone and it moves to New York for a deciding Game 7 Sunday after a 5-3 Rangers victory.

“I would like us to maintain the lead,” said Pens Head Coach Mike Sullivan.  “We were in a good place.  Our team was playing well.  We give them a power play, they score.  Now it’s a one-goal lead.  It’s a game of momentum.”

“I think the issue has been the second period where we get on our heels a little bit and can’t capture our game quick enough,” said Pens defenseman Mike Matheson.  “I’m not sure what the cause of it is exactly, but it’s an area we need to get better at.”

“We need to do a better job of not getting rattled in those situations.”

Pens owned the first period, goalie Louis Domingue kept the game scoreless having to make a couple of shorthanded stops on another bad power play.  Six minutes to go in the first, after some great zone pressure, Jeff Carter finished his fourth goal of the playoffs with assists to Kasperi Kapanen and Marcus Pettersson.  Bryan Rust working in front would score 1:36 later with an assist to Jake Guentzel to give the Pens a 2-0 lead after one, and firmly in control.

Pens forward Brian Boyle would leave with an injury as Domingue made a couple more solid saves, momentum still with the Pens early in the second.  It would change five minutes into the period.  Boarding not called on Ryan Lindgren and in retaliation, Evan Rodrigues called for roughing.  It would take Mika Zibanejad five seconds to make the Pens pay.  Domingue screened by defenseman Kris Letang to cut the lead to 2-1.

“He can’t, he simply can’t,” Sullivan said of Rodrigues’ penalty.  “He has to keep his emotions in check.  That’s a necessary part of winning this time of year.”

Just over a minute later, another slapper by Zibanejad as the puck got under the Pens goalie to tie the game.

An opportunity for the Pens to take the lead, having 1:07 of a 5-on-3.  Not only did they not take advantage, but the brutality of that power play helped momentum for the Rangers who would score a few minutes later on a rebound by Chris Kreider on the power play to take a 3-2 lead.

“We have to clarify those things, maybe simplify,” Letang said of over three minutes of 5-on-3 over the last two games.  “We need to take shots and create rebounds.  It’s tough to read where the puck is going to go.  You got to find that rebound and put it in.”

“I think a lot of it is confidence when the power play is firing on all cylinders, those guys are snapping it around,” Sullivan said.  “There is a lot of motion and instinctive play and they are hard to handle.  I think the 5-on-3s we got we were deliberate with our decision-making and execution.  As a result, we are predictable.”

Yet the Pens still got it back even, like they did in Game 5.  An Evgeni Malkin breakaway tied it at 3 and that’s where it stood after two periods.  The third was pretty much back-and-forth, Domingue had an early, big save.  Rust missed an opportunity shooting high in front of the net, missing the cage.

The game-winner came as Domingue fought off a high shot by Zibanejad with 1:28 left to play in the third.  The puck popped up in the air behind the Pens goalie and bounced into the net for a 4-3 New York advantage.  Andrew Copp would add an empty-netter with 27 seconds left.

“I think our team has played a lot of really good hockey,” Sullivan said.  “We could be better in certain areas, for sure.  Special teams, we know we are capable of being better.  We have to find a way of doing that.  We know the solutions are inside our dressing room.”

“I know this one is disappointing.  We were hoping we would have an effort to bring us a win.  It didn’t happen.  We will be ready for Game 7.”

Boyle suffered a lower body injury in the first period and did not return.  There was no update to his condition after the game.

“It’s just hard because it’s one less penalty killer for us and he’s a good one for us,” Sullivan said.  “He makes good reads.  He’s a big body, good shot-blocker, a lot of experience.  To lose a guy that early in the game, you go down to 11 forwards once again.”

“These games are hard, they are physical, emotional and there is a lot of investment in these types of game.  When you go to 11 forwards, it places a physical burden on the group.”