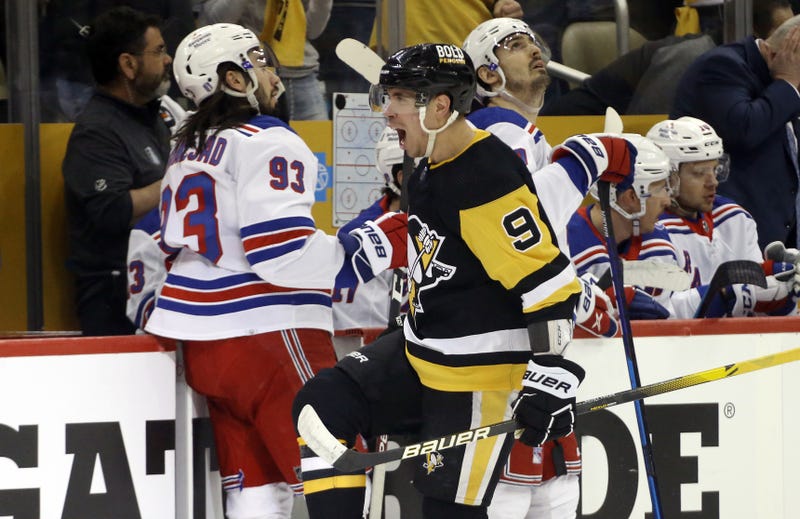 PITTSBURGH (93.7 The Fan) – Pens head coach Mike Sullivan was succinct hours before Friday’s faceoff against the Rangers. His team is not seeking out an opportunity to get New York’s Jacob Trouba for his hit on Sidney Crosby that knocked him out of Wednesday’s game and tonight’s.

“We are going to play the game that’s going to give us the best chance to win,” Sullivan said.  “That is where our focus is.”

Not having Crosby impacts on many levels, but most specifically here with the lines.  Evan Rodrigues, who has played up and down the lineup this year, moves back from wing to center a second line with Danton Heinen and Kasperi Kapanen.

“He’s just a good player,” Sullivan said.  “He has real good offensive instincts.  He has played some of his best hockey with us this year at the center position.  We’ve utilized him on power plays, penalty kills.  One of the reasons we signed E-Rod was just his versatility and our ability to move him up and down the lineup depending on the needs of the team.  He’s had a real solid year for us.”

Rodrigues had a stretch in the season of seven goals and four assists in six games and much of that from the center slot.

“Getting the puck on your stick more often, feeling comfortable with it,” Rodrigues said of the adjustment.  “Making plays from there and having the confidence to trust your ability and make things happen.”

“Those four guys are all extremely skilled with the puck and find open guys,” Rodrigues said.  “I think the key to success on that power play is having that five-on-five mentality, winning puck battles.  Once you get possession that’s when you let your natural ability take over.  Try not to be too cute with it, try to shoot the puck early and let things come to me.”

Rodrigues noted they’ve been able to deal with injuries all year.  He believes they have the right mentality.  The 28-year-old says the key for him is just being the same player and not trying to do too much.

“For me it’s about making hard plays, being simple early.  Not chasing it, letting the game come to me and continue to play the way I’ve been playing the first five games.”

That being said, Rodrigues admits having this opportunity will bring a little ‘extra juice’ out of him.  He’s fired up to prove what he can do.

Malkin will move up to center the top line with Guentzel and Rust.  It’s a position he’s been in before, having to lead the team without Crosby.  According to Statmuse.com, Malkin has 199 points in 148 career games with Sid out of the lineup.

“He’s a terrific hockey player with the ability to be a dominant hockey player,” Sullivan said of Malkin.  “I know how much he cares about helping this team win.  I know how invested he is in the Pittsburgh Penguins.  We expect him to be the player he’s been for us his whole time here.”

Sullivan said often in these positions he’s had players step up.  Who will do it tonight?