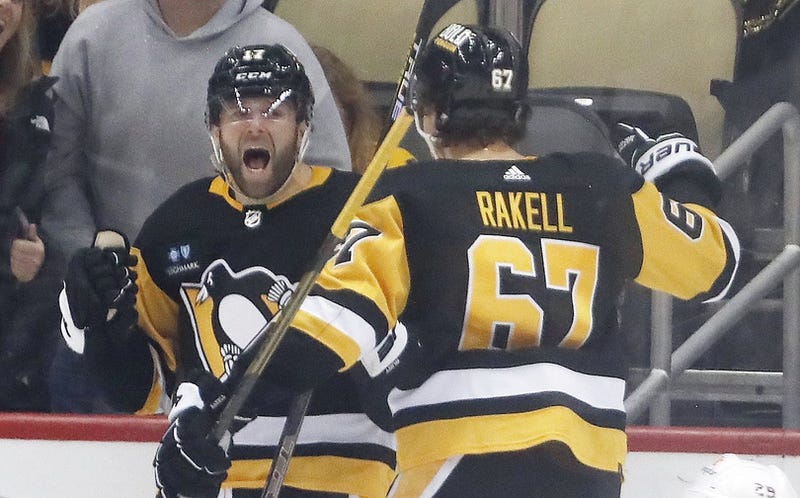 PITTSBURGH (93.7 The Fan) – Never losing faith, the Pens find a way to avoid a horrible loss and turn it into a two-point night against the last-place Ducks. Pens win it Monday 4-3 in overtime.

“I think it’s a huge win for us, especially with the way it evolved,” said Pens head coach Mike Sullivan. “We had a lot of chances throughout the course of the game. We couldn’t seem to find the back of the net. When they scored with four-and-a-half minutes to go in the game, given the circumstances and what our team has been through, in a lot instances that could really deflate a team. I never sensed that on the bench. I thought our leadership was terrific. There was a lot of talk about getting it done.”

“We definitely believed in ourselves there,” said forward Bryan Rust. “I think that’s the key. I don’t think we got down. I think everybody had that mindset, there were guys talking on the bench like ‘hey, we are going to get this one’. Keep digging, keep pushing, get it to overtime and then we will win it there.”

Pens were seemingly in control until a power play goal by Anaheim’s John Klingberg tied it with 11:16 to play and then about five minutes later Trevor Zegras scored to give the 12-win Ducks a 3-2 lead.  Rust would tie it with 33 seconds left in the game with the goalie pulled as Rust said Jake Guentzel made ‘an unbelievable play’ to get the puck to him.

The first rush of overtime was Anaheim’s with Zegras and Ryan Strome, Pens goalie Casey DeSmith said he got lucky making a save on a two-on-one. Then Guentzel and Sidney Crosby went the other way, Crosby finding Guentzel to end it.

“It was huge,” Guentzel said. “We stayed with it, got some chances and we converted when we needed to. Those were two big points for us and we need to get going. Hopefully it gives us some confidence.”

To the goalies next, but back from illness defenseman Marcus Pettersson went down to one knee to stop an Anaheim shot late in the second period. The puck went off his left shoulder and kept it 2-1 Pens at the time.

“I was just lucky he did not get all of it when I blocked it,” Pettersson said.

The defenseman added about the significance of the win.

“It was huge,” Pettersson said. “We got a little bit before the break here, we have to make sure we really capitalize on this. The points are worth the same as in March.”

Anaheim’s John Gibson had struggled coming into the game giving up 29 goals in his last six starts and one of those was a shutout win over Dallas. Gibson stopped 41 shots Monday night and kept Anaheim in the game.

Pens started Casey DeSmith as he stopped 26 shots for his sixth win of the season. One of them was just before the horn to end the second period, adjusting to stop a Mason McTavish rocket.

“I was just trying to see over some bodies,” DeSmith said. “McTavish has a good one-timer, I just slid over and got a piece of it. I actually didn’t know where it was, it was in my glove I guess.”

With the Pens currently teetering on a playoff spot, DeSmith also noted the significance of the victory.

“Every win is important,” DeSmith said. “Every point is important at this point for us. It was really good for our confident to pull it out there. It would have been pretty deflating. We are desperate for every point now. We have a lot of guys stepping up. We are missing some big names we are hoping to get back soon.”

·     Pens are expected to get Kris Letang back in the ‘next day or so’ according to Sullivan.
·     Defenseman Jan Rutta went through morning skate, but suffered an upper-body injury and is day-to-day.
·     Defenseman Jeff Petry and forward Ryan Poehling participated fully in the game-day skate wearing non-contact jerseys. Sullivan called it a step in the right direction for both.
·     Goalie Tristan Jarry took numerous shots in a workout on the ice before practice, but still has yet to rejoin team workouts.
·     Forward Josh Archibald also worked out on the ice Monday before morning skate.

·     The Pens are one of two Eastern Conference teams that Gibson has a career sub-.900 save percentage against (Rangers)
·     It was Rickard Rakell’s first game against his former team and had a game-high three assists
·     Jason Zucker (goal, assist), Guentzel (goal, assist), Evgeni Malkin (goal, assist) all had two-point nights