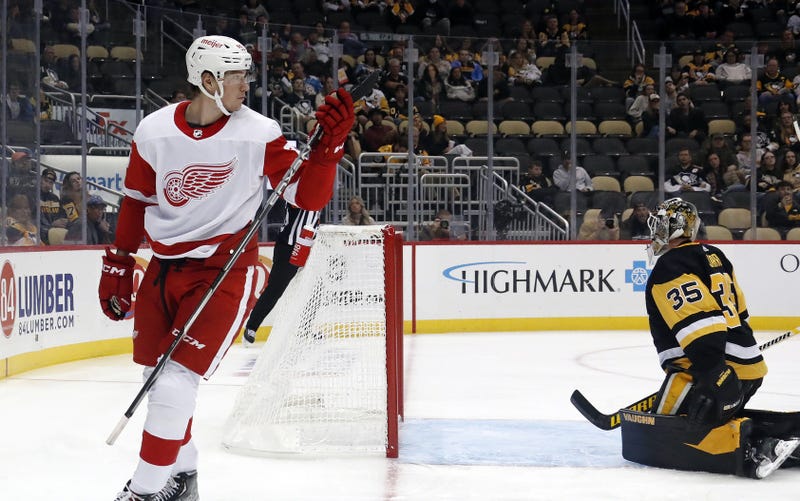 PITTSBURGH (93.7 The Fan) – It was possibly the Opening Night starting lineup or at least most of it as the Pens played a third exhibition game Tuesday night at PPG Paints Arena. It turned out to be a dreadful performance in a 6-2 loss to Detroit.

The Pens were 0 for 9 on the power play, while allowing 2 for 2.  Pens Head Coach Mike Sullivan saying they really haven’t spent a lot of time on it, it wasn’t until Tuesday morning skate where they practiced it at all.  They had three practices total before playing the Red Wings.

“It’s almost good that we got those,” said forward Bryan Rust, who scored on a backhand, forehand, backhand roofer.  “We obviously need the practice, we just have to get on the same page and jell a little better.”

“It was a bit discombobulated at times.  There were times we were working together well and getting some chances.  There were times where we weren’t on the same page and weren’t doing the right things.  I think we gave up some fairly easy goals with wide open nets.  Things we have to learn from moving forward.  I think we were just lucky it wasn’t a regular season game.”

“There is a lot to work on,” said forward Brock McGinn, who had the first goal of the game.  “I think everyone takes pride in here on execution and holding the standard.  I think we have to go in tomorrow, focus on getting better in those specific areas.”

Despite the outcome, allowing three special teams goals while being shutout on nearly 10 power play attempts, Sullivan was not bringing down the hammer on his team.

“My experience of coaching in this league with veteran players, like we had in the lineup tonight,” Sullivan said.  “These guys have been through this an awful lot.  You get a little bit of a gage of what you have to work on and what you have to get better.”

“I’m reluctant to overreact in these circumstances because my experience is that veteran players try to get what they need.  We’re trying to get our team ready.  We were hopeful we would have had a stronger effort than we did.  We know we have a ways to go.”

“This is what I said to the players after the game, let’s not get discouraged, but if there is any takeaway, the takeaway is we have a lot of work to do.  That’s an important aspect of tonight’s game.  We won’t get discouraged.”

Tristan Jarry started giving up four goals on 14 shots. Casey DeSmith came in midway through the second period and gave up two goals on seven shots.

The Pens top line with Rust joining Guentzel and Crosby had a lot of success last year.  Why are the Pens working Rakell with Crosby and Rust with Malkin?

“I just think he has great tight-area skills,” Sullivan said.  “His stick skills in traffic.  His ability to protect pucks.  His hockey IQ, his vision.  I think that allows him to excel in those areas of the rink.  Raks is a really talented guy.  He has the ability to create offense different ways.”

“We are exploring some of the combinations with some of the players that we have right now.  I know (Rakell) played some last year with Sid and Jake.  We believe he potentially is a guy that could compliment those guys and that line could be very good for us.”

“We are going to try Rusty with Geno.  Their play has been well chronicled over their time here.  They’ve shown the ability to have chemistry and play well together also.  We recognize we have other options, we are going to explore some.”

“I think he’s going to help us on our net front on the defensive side, but we are not compromising anything from a transition standpoint or a speed or a skill standpoint.  We play those guys together intentionally to see if that combination could potentially work for us.  We are giving them some time to develop some chemistry.”