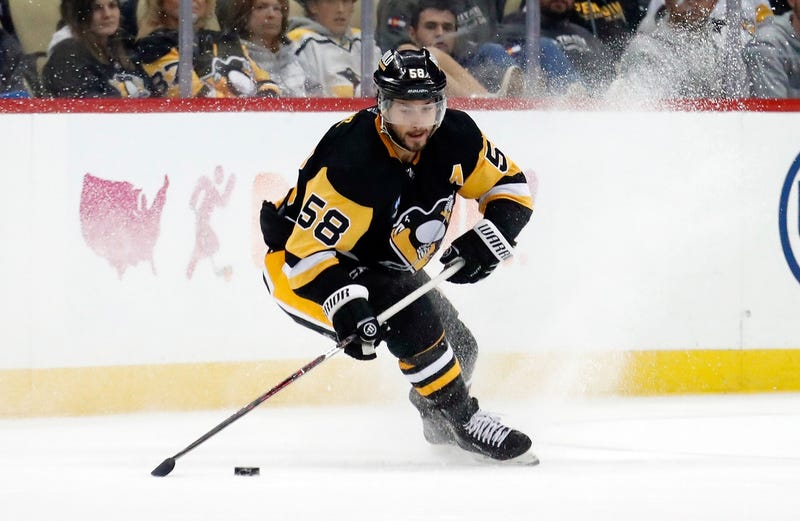 PITTSBURGH (93.7 The Fan) – Out since December 28, Pens defenseman Kris Letang is expected to rejoin the team in the next day or so. A number of other team notes including line changes with Casey DeSmith in net against Anaheim.

Mike Sullivan said last week Letang would need to work his way back from injury as he’s missed most of the time due to the death of his father. It looks like the 17-year veteran will be with the team before they head to Ottawa Tuesday afternoon.

“Tanger being out, that’s a guy that takes a lot of minutes and when you have a guy like that out,” said injured defenseman Jeff Petry. “Those are big shoes to fill.”

“We are trying to put combinations together that we think we can gain some traction with,” Sullivan said.

Here is how it played out in Monday morning’s practice

One of the bigger changes is Teddy Blueger moving up to center the third-line with Drew O’Connor and Jeff Carter.

“I got to keep my mindset the same,” Blueger said of moving up to the third line, noting it is an opportunity for him. “Just play my game where it’s at its best. Focus more on the process than the outcome or what line I’m on.”

“It’s nice that Teddy’s a left-handed shot, Carter is a right-handed shot,” Sullivan said. “Both can take faceoffs, here are a number of advantages. These guys are both solid players, Carter has played a fair amount on the wing.”

Yes, the hockey forward was recalled and centering the fourth line during morning skate on Monday. Jonathan Gruden has a career-high 11 goals in the AHL in 32 games this season.

“Work ethic, playing my game, moving my feet and trying not to think about it too much,” Gruden said of what he’ll bring if he gets in the lineup. “Need to finish checks, be an energy guy and try and help the team win.”

It seems as if Rakell has been with the Pens for a while, but not long enough that he’s faced his old team, until Monday. In 10 seasons, Rakell had 339 points (154 goals) in 550 games with the Ducks.

“He’s played extremely well for us,” Sullivan said. “He’s a real talented player with great offensive instincts and has the ability to make something out of nothing. Sometimes you think the play is dead in the corner and he finds a way to come out of the traffic with the puck. I think he’s the type of player we felt could play the type of game we want to play in Pittsburgh. We think he’s fit in seamlessly.”

“He’s been in a controlled environment and that environment is progressing closer to a game situation as we go,” Sullivan said.

“Taking the time and taking the steps to get back and hopefully get out there soon,” Petry said.

“It’s an upper-body thing I’ve been dealing with for a bit,” Poehling said. “It’s day-by-day, I’m definitely progressing which is nice. That’s all I’m focusing on is getting healthy and I don’t know what the timeframe is, but seeing progress, which is good.”