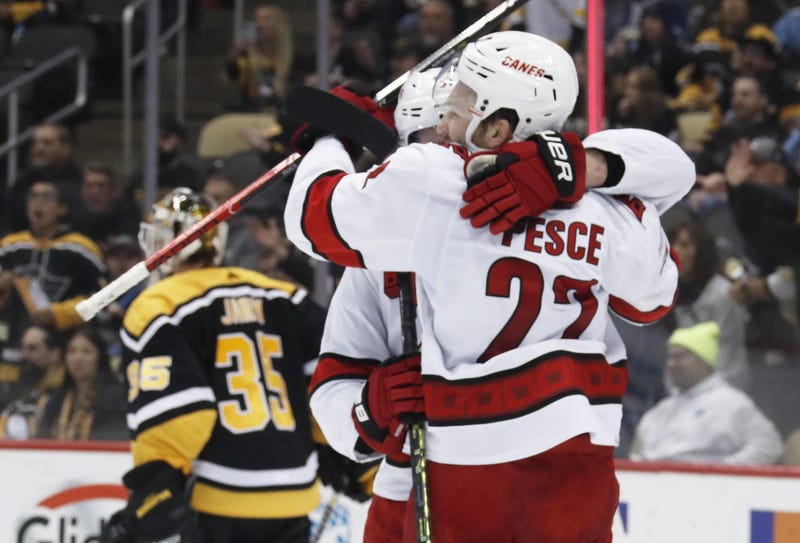 PITTSBURGH (93.7 The Fan) – When Bryan Rust was knocked down into the boards in front of the team bench, Jeff Petry went to defend his teammate as the puck went forward. While the Pens were wondering why a cross-check or boarding wasn’t called on the Hurricanes Seth Jarvis, Carolina went two on none into the Pens zone and scored the game-winner, 3-2 the final in overtime on Tuesday.

"When you saw it from the bench up close and at that speed, that was their reaction,” Pens Head Coach Mike Sullivan said of his team. “That reaction was real because it was a dangerous hit. So, I disagreed with the call."

Or no-call in this case.

“I thought I was jumping in the pile there,” said Pens defenseman Jeff Petry who was on the ice and didn’t stay with the puck, rather went to Rust. “I thought it was going to be a penalty. To me it looked like it was, they saw it differently. It’s a tough one to swallow.”

“Unfortunately, the puck squirts out and they are able to get a 3 on 0 to end it,” said Pens goalie Tristan Jarry, adding it’s tough to say when the refs saw there. “It’s disappointing.”

Petry was heading for hero status before the overtime sequence. The veteran hustled back to cause an offsides that would have been an easy empty net goal. Then it was his shot that Jake Guentzel deflected to tie the game with 58 seconds left.

“It’s a tough sequence what happens at the end of the game,” Jarry said. “It was good to get one six-on-five, I think that’s a positive thing. We’ve been working on that quite a bit. To get a point out of that, it’s big.”

“Down 2 to 1, to tie it up, you got to get those points while you can,” Petry said. “We would have liked to get two, but getting one in those circumstances was a positive.”

The Pens scored the first goal of the game, coming off yet another penalty kill, PO Joseph collected the puck, got it ahead left side, blue line to Jake Guentzel. He found a streaking Crosby who settled it down with his foot and over to his stick and pushed it through the goalie for a 1-0 lead which lasted into the second period.

“I think he’s building his game,” Sullivan said of Jarry. “We have such high expectations of Jarry. He’s making progress. He made some good saves for us tonight. Carolina is a team that shoots the puck from everywhere trying to create that next play. That’s hard to defend. I thought he did a good job of controlling those rebounds so they don’t go into dangerous areas.”

Pens were 0 for 2 on the power play generating ZERO shots. That means six straight games without a power play goal.

Kasperi Kapanen returned to the lineup after missing nine of the last 10 games. Kapanen replaced Danton Heinen as the right wing on a line with Jeff Carter and Brock McGinn. He played 12:55 with three shots and three hits.

Defenseman Kris Letang was out sick so Brian Dumoulin moved up to the top pairing with Jeff Petry. Marcus Pettersson slipped to the second pair with Jan Rutta. Chad Ruhwedel with Pierre-Olivier Joseph.