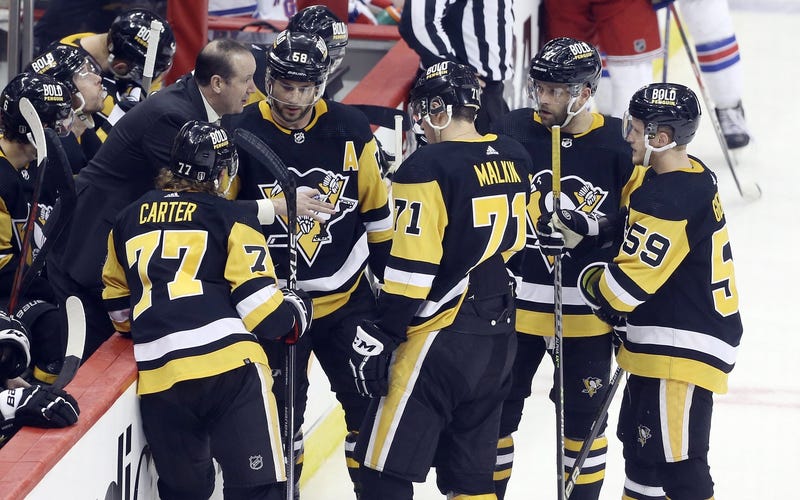 PITTSBURGH (93.7 The Fan) – A look at the questions surrounding the Pens as training camp opens on Thursday in Cranberry.

Those with a glass half-full will tell you the Pens would not only have won the series against the Rangers if they had an NHL goalie and if Crosby played the whole series, they could have made a run.  Mike Sullivan believed it.  They did push the Rangers to a seven-game series with Louis Domingue in net and then a one-legged Tristan Jarry in Game 7.

If that is true, bringing the group back together was the right move and their chemistry should pay dividends especially early as other teams are finding their game.

One of the major reasons for the early playoff exits was a lack of size in the postseason.  The inability to move people out in front of the net.  The addition of Rutta and Petry should help along with a potentially better 6’3” Drew O’Connor, a healthy Brock McGinn, maybe a more experienced Radim Zohorna as the 6’6” winger is still just 26-years-old.  While not big, Nathan Legare has shown some fire and Sam Poulin starting to play more physical among the rookies.

Not that Mike Sullivan needed an endorsement, but his contract extension would clear up any doubt the players would have in his coaching philosophy or at least the new ownership believing in that system.  It’s another full year for Sullivan to work with GM Ron Hextall and maybe Hextall’s wish to become more physical will resonate more with Sullivan.  Or, what if the officials would call penalties in the post-season or punish cheap shots.  One can dream.

Can the 35-plus crew of Sidney Crosby, Evgeni Malkin, Jeff Carter, Kris Letang and soon-to-be Jeff Petry continue to play at a high level?  Last season they combined for 332 games, 86 goals (20 game-winning) and 180 assists.  Petry is the new addition bringing some more toughness on the blueline and 48 career post-season games.

As a restricted free agent, the Pens took a chance on the 6’1” winger who teased with 11 goals and 19 assists in 40 games in the 2020-21 season after being reacquired.  Last year was anything but consistent, having five different pointless streaks of at least four games including one of 13 games.

What is Rickard Rakell as a Penguin?

Injured in the first game of the playoff series with the Rangers, Rakell had four goals in 19 games with the Pens after the trade with Anaheim.  Potentially locking onto a line and settling in could help the forward who looks like a perfect fit in the Pens system.

What would Tristan Jarry do healthy in the playoffs?

From his first win on October 12 of last year, the talk was ‘that’s great, but can he do that in the playoffs’  Jarry would finish the season sixth in goals against average, save percentage and shutouts, and eighth in wins.  A foot injury kept him out from April 14th until Game 7 of the first-round series where he tried to play on one leg, but lost.  The question remains if he can avenge his horrible playoffs in 2020.