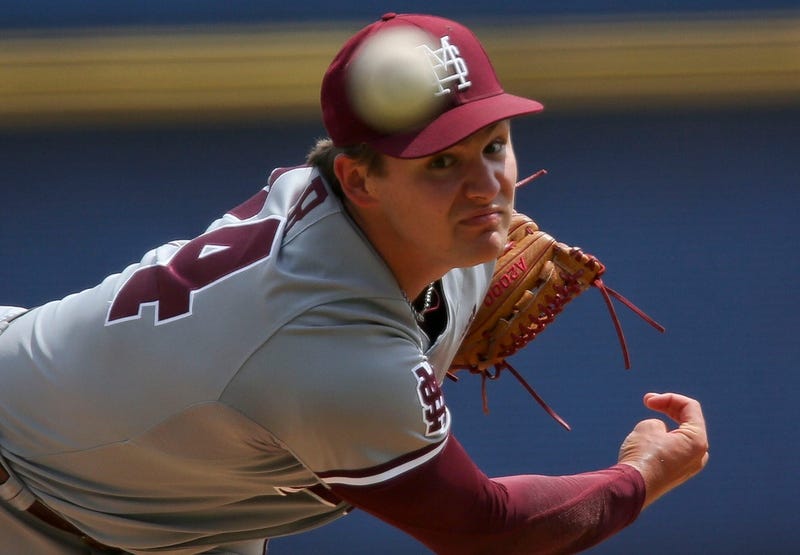 PITTSBURGH (93.7 The Fan) – Pirates 1996 first round pick Kris Benson was the last to do it. Now a Mars High School graduate matched the amazing performance at college baseball’s marquee event Sunday.

Mississippi State redshirt freshman Will Bednar struck out 15 in 6 innings in a 2-1 win against second seed Texas Sunday at the College World Series.  Benson did it in 1996 for Clemson against Miami.

“I felt like it was a great performance,” Bednar said.  “Probably my best ever, especially on this big of a stage.  It was really cool.  I felt like fastball was playing really well up in the zone and slider played well too.”

Bednar said he treated it like another game, didn’t allow it to get too big to face a storied program in the College World Series.  Maybe it was also some straightforward advice from his head coach before the game.

“I was telling him before the game we saw the wind and I said the best thing was to strike them out,” said Bulldogs head coach Chris Lemonis.  “He was able to do that.  I really did make that comment.”

Only four balls put in play, three fly outs and a ground ball up the middle for the only hit.

The younger brother of Pirates pitcher David Bednar, Will admitted he knew how many strikeouts he had.  He would peak at the scoreboard.  He also acknowledged he was upset pulled in the seventh inning after 108 pitches.

His father the Mars HS head coach, Bednar didn’t show up his college coach.  He walked to the dugout, stood on the top step, watched and cheered as teammate Landon Sims strike out six more for a total of 21.

“I grabbed Will after the game, I handed him a game ball,” Lemonis said.  “I told him this is one of the better performances ever here.  Six innings, one hit, 15 punchies, not many guys have ever done that because the talent level is so high.”

The 6’2”, 229-pound right-hander is not eligible for the MLB Draft until next season.  He has the potential to be a high, first round pick.  Lemonis says Bednar is a phenomenal worker and it’s the work in-between starts that helps separate him.

He’s also an alpha leader for his team.  The 26-year college head coach knows where that comes from.

“You look up and that’s a baseball family,” Lemonis said.  “Dad’s a coach.  Brother is pitching in the big leagues.  He’s been like that since he’s been here.  He’s just a competitor.”

He’s also the presenter of one of the coolest Father’s Day gifts ever.