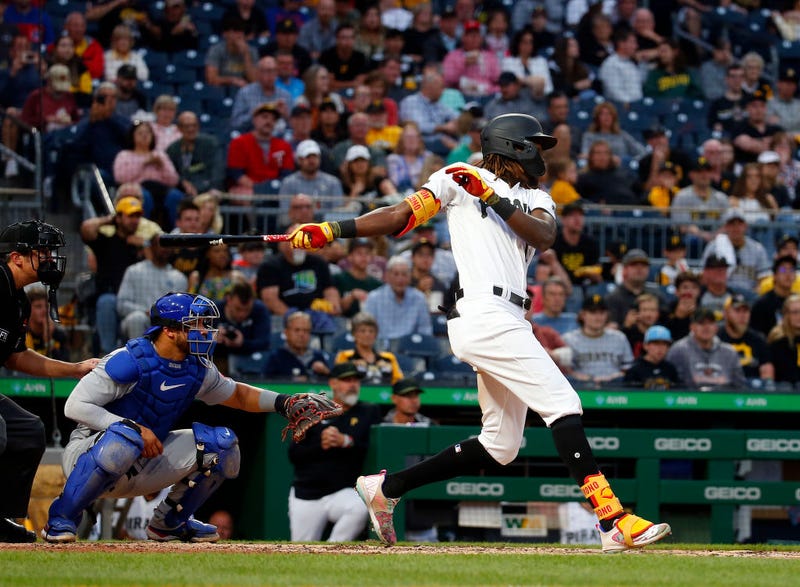 PITTSBURGH, PA - JUNE 20: Oneil Cruz #15 of the Pittsburgh Pirates hits a RBI single in the seventh inning against the Chicago Cubs during the game at PNC Park on June 20, 2022 in Pittsburgh, Pennsylvania. Photo credit (Photo by Justin K. Aller/Getty Images)
By Jon Fisher

PITTSBURGH – The Pittsburgh Pirates' bats came out in full force against the NL Central rival Chicago Cubs finishing with a 12-1 score, making it the most runs scored in a game this season.

This was only the second time the Pirates reached double-digits, scoring 10 runs in late-May against the Colorado Rockies.

"It was a clean game. [J.T. Brukaber] Bru did a really nice job. He battled through the fourth, which was a little concerning with the fact of where the score was, and then came back and was really efficient," said Pirates Manager Derek Shelton.

It was a historic night for the dynamic rookie duo in black-and-gold on Monday evening at PNC Park. RF Bligh Madris paced the Pirates, going 3-for-4, and tallying 2 RBI and a stolen base. He was the first Pirate player since 1920 to record two RBI and a stolen base in his MLB debut.

Madris is also the first Pirate since 1996 to have three hits in his first big league start. C Jason Kendall accomplished that feat on April 1, 1996.

Cruz finished the evening 2-5 with 4 RBI, but his impact was felt way more than just the scoresheet.

Analytically, the Dominican-born star racked up the speed with his feet, arm and exit velocity with the bat. Below is a timeline of the athlete Pirates fans are about to witness for the next several years.

So: ONeil Cruz has been back up for about 25 minutes. He's already got the hardest tracked throw by an infielder of the season (96.7). I think that's going to work. pic.twitter.com/0vOCbs6BVo

3 innings into his 2022 debut, @Pirates' Oneil Cruz has registered:

"My mindset was just to get better defensively. I was very focused on that and I put a lot of effort into that, and I was able to see a lot of results. I felt equipped enough to come back," Cruz said to reporters before the game.

Brubaker earned his first win of the 2022 campaign, pitching six innings, while giving up five hits and striking out five. He has a 2.45 ERA in his last three starts.

DH Daniel Vogelbach and OF Bryan Reynolds both contributed two hits to the effort and IF Hoy Park drove in two runs on sacrifice flies.

Prior to the game, GM Ben Cherrington talked about Cruz’s arrival in Pittsburgh and why now was the right time to bring him into the fold.

“I don’t know that there is a perfect day. Obviously, the offense has been trending in a pretty good direction. Consistency of the at-bats and the hard contact have gotten significantly better since that first month or first few weeks of the season,” he said.

“He’s worked hard on that. The defensive side of the game is something that will continue to grow, continue to improve.”

Before getting called up to the big leagues on Sunday, Cruz sported a .232 batting average with seven doubles, nine home runs and 35 RBI in 55 games with Indianapolis.

On top of being the Pirates no. 1 prospect entering the 2022 season, Cruz did get a taste of MLB-level pitching at the end of the 2021 season.
In two games against the Cincinnati Reds, he went 3-for-9 with one home run.

The Pirates continue this seven-game homestand for three more against the Cubs. Tyler Glasnow and the Tampa Bay Rays will play host to the Bucs beginning on Friday.