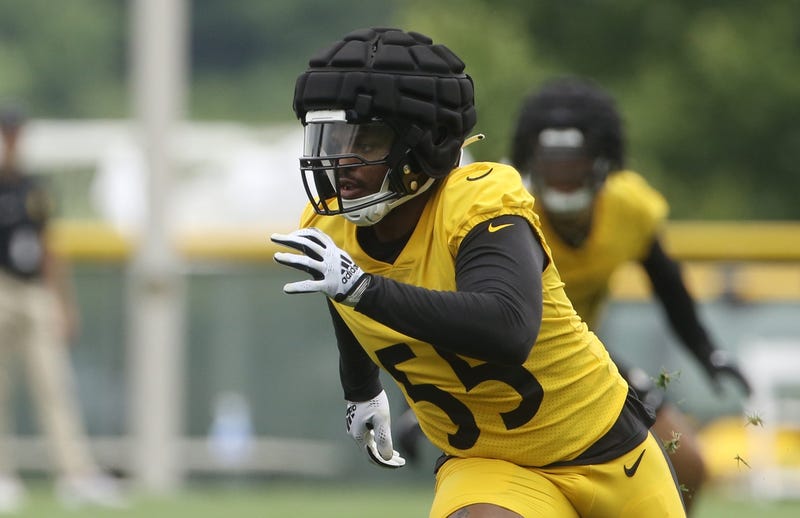 LATROBE, PA (93.7 The Fan) – Right now he’s a ‘penciled in’ starter at inside linebacker, but make no mistake 2019 first-round pick Devin Bush is in a competition for a starting job.

It’s still early in camp and a true test will be game action, however Robert Spillane is not going away.  Now in his fifth season and with a handful of starts, Steelers Defensive Coordinator Teryl Austin said Spillane is in the mix at inside linebacker.

“I think Robert has put himself in the conversation in that regard,” Austin said.  “Like with anything, your performance will dictate whether you start or not.  I expect it to be a heck of a competition.”

Mike Tomlin has been rotating Spillane with Bush and newcomer Myles Jack in different combinations.  It hasn’t been just Spillane playing with Jack, he’s also filled in for Jack.  It’s clear, though, the player who would have time cut is Devin Bush.

“Me and Rob are the same age, so we are the older guys,” Jack said of Spillane.  “I’m really trying to learn the Steeler way.  Rob has been keeping me on point.  We are constantly talking and that communication is going to allow all of us to play faster.”

“I try to come out here every day and put on the best performance I can do,” Spillane said.  “At the end of the day, who plays and who doesn’t play is up to the coaching staff, I leave that to them. But I’m going out here and working my ass off every day.”

Spillane said they approach competition as teammates, that they love each other and help each other out.  They are willing to share information and insights between all seven at the inside linebacker position.

That includes Myles Jack sharing a perspective from outside the organization.  A six-year veteran, Jack said he’s really tried to be there to help Bush.

“We bounce a lot of ideas off each other,” Jack said.  “Every play when we come back to the sideline I’m saying ‘what did you see’?  He’s telling me what he saw.  We are making sure we are always together and seeing the same thing.  It’s been really good.  Me being there has allowed him to play faster.  Him being there has allowed me to play faster.”

“Spillane is in there too.”

“We will see how it unfolds,” Austin said.  “If you were trotting them out today, I would say Jack and Bush.  Spillane in there as a close third.  It’s a good competition.  It helps all of those guys to be able to step in there and work and not have a big drop off.”

In the final year of his rookie contract, his fifth-year option not picked up.  Time is running out for Bush to be the player the Steelers traded up 10 spots to draft.