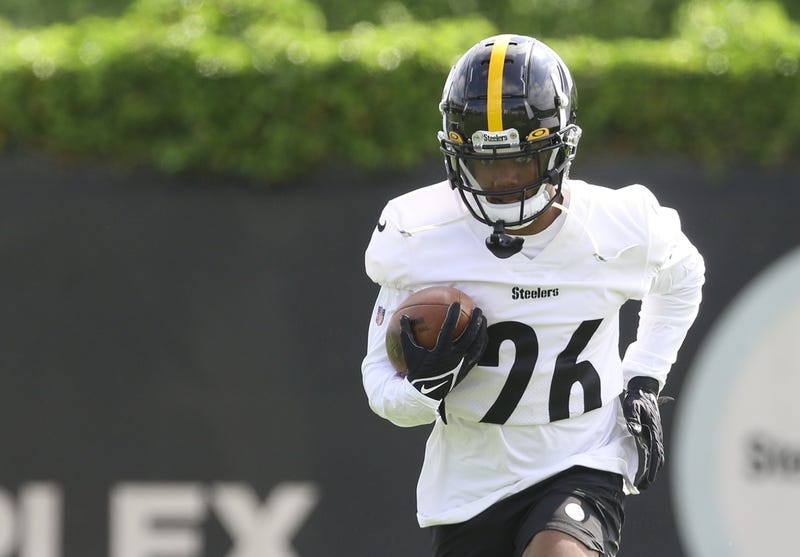 PITTSBURGH (93.7 The Fan) – During mini-camp Steelers running backs coach Eddie Faulkner told us they want to reduce the touches Najee Harris gets in a game. Harris confirmed it saying he understands as he took more hits than any tailback in the NFL last year. The trick is, for Najee to get off the field, they have to be confident in a second running back.

Benny Snell had 36 carries as the backup last year.  Kalen Ballage had 12, he wasn’t re-signed.  Anthony McFarland had three.  The latter believes he brings something different and is finally ready to show what he can do.

There was a lot of excitement when McFarland was picked by the Steelers three years ago.  He would finally be that change-of-pace back they have wanted to help take a little off James Conner’s plate.

The challenges came early for McFarland, the coronavirus pandemic eliminated off-season workouts and changed the nature of training camp.  As much as any player, McFarland seemed lost at times without the training, falling to third in the depth chart and carrying the ball 33 times for 113 yards and catching only six passes for 54 yards in 11 games.  The following year he believes he was on the right path.  After a modified off-season, McFarland was optimistic, until a MCL injury in training camp limited him for the first half of the year as he played in just two games with three yards on three carries.

“It’s tough,” McFarland said.  “You live and you learn.  With this game you are going to go through a lot of adversity.  I was aware of that.  I’ve been going through it my whole life.  Nothing has ever been easy for me, I’ve always had to work through things.”

“It’s making be a better player and a man.”

What has changed since being drafted three years ago, the Steelers now have an unquestioned number one tailback in Najee Harris.  What hasn’t changed is he’s again competing with Snell to be the back-up.

“I feel ready,” McFarland said. “I say I feel ready is because I got a chance to learn.  Not just on the field, but off the field and what it takes to be a professional.  The things you do during the week to prepare for Sundays, during practice it pays off.  It’s something that is starting to click for me in year three.”

“Getting tougher mentally and trying to focus on the main thing finding a role for the team on offense.”

What jumped out to most after he 23-year-old was drafted, was his first season playing at Maryland.  He had a pair of games in November that put him on the map.  He rushed for 210 yards on the road at Indiana and then the following week rushed 21 times for 298 yards against 13-1 Ohio State.  McFarland had an inconsistent second, and final, college season finishing with 134 yards rushing at Michigan State on eight attempts.

Does that burst still exist?  Can he find the game that intrigued Kevin Colbert and the scouts?  What does McFarland think he can be for the Steelers this year?

“A guy that can be anywhere, wherever the coaches want me to be and doing it at 100%,” McFarland said.  “Knowing my job and knowing what I’m supposed to do and just doing it at 100%.  I just want to show the versatility to help this team and offense.  It’s a team game, that’s all I’m focused on is to find a role to help the team become better.”

“It starts with finding my way on special teams, fighting for a kick returner job.  Everything on offense will just come.”