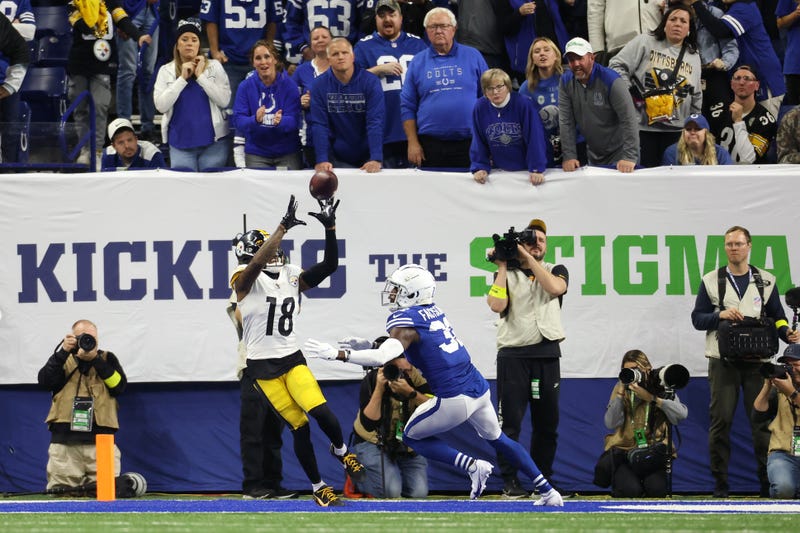 Every wide receiver wants the ball, and they want the ball a lot. That’s true for Diontae Johnson, and it hasn’t happened for him yet.

But the fourth-year Steelers wideout has mentally decided to put those desires on the back burner for now.

“I’ve come to the fact that I'm having a great year, to me,” Johnson said Wednesday, two days after the Steelers’ Monday Night Football win over Indianapolis. “Obviously my stats aren’t showing it, but (I’m) just trying to be a better leader. Just not trying to play for self, trying to be a team player at the end of the day because my opportunity is going to come, my play is going to come.”

Johnson, to this point, has caught 56 passes for 505 yards in the Steelers’ first 11 games. He has yet to score a touchdown after putting up 20 n his first three seasons.

“I may not be getting a ball like I want to right now, but I’ve just got to keep playing,” he said. “Something’s going to happen either this year or next year. But I'm not worried about my stats right now. I'm just trying to win the game and finish season strong.”

While Johnson’s dropped pass totals have gone down the last couple of seasons following his NFL-worst 13 drops in 2020, they have shown up this season at inopportune moments, including a dropped touchdown during the fourth quarter Monday night. He also made a gaff during that same drive, when he ran backwards after receiving pass, failing to get a first down.

But he continues to feel that he, and the Steelers’ offense, is trending in a positive direction, even if big passing totals between he and rookie quarterback Kenny Pickett aren’t coming.

“Throughout the season, people have been saying that we haven’t been clicking. But stuff like that takes time,” Johnson said. “We’ve actually been having more time with each other. More offensive meetings, just being around each other more, just getting that time because doing that stuff, we get to see what (Pickett’s) looking at, what he's not looking at, where is he throwing it.”

Johnson has seen Pickett develop more over the last three games individually. The Steelers have not turned the ball over in those games, and have gone 2-1, with the lone loss being a 30-point effort from the offense against Cincinnati.

“He’s definitely just more aware, playing safe and trying to just not do too much,” Johnson said of Pickett. “He’s being himself out there and just letting the offense flow. When he’s out there playing like that, we all play well. He’s not forcing. He’s playing comfortable, as well. He’s going to continue to do that, and we’re going to continue to make plays for him down the field.”

At 4-7, the Steelers’ season isn’t exactly over, but it’s also a massive long shot for a playoff spot. So, right now, Johnson is focusing on the here and now, leading young players like rookie George Pickens, who Johnson was spotted talking with on the sideline following a drop agains the Colts.

“(I’m) just trying to be that teammate, be there for him when he’s down and out,” Johnson said. “It’s my job as a player, as a leader, to just step in and say, ‘hey, it’s going to be alright, you’re going to have situations like that.’ It’s how you respond to it.

“You can’t let one moment define you or take you out of your game. I told him that I’ve been there before, and you’ve just got to lock in and let it go. The best of the best are going to do it, so move on from it and just learn from it.”

Johnson has been an oft criticized Steelers player, and there’s validity when it comes to his lack of results. He’s making $18 million per season, and has to produce more if the Steelers are going to pull a rabbit out of a hat and get back into contention.

But he realizes that, more than that goal, continuing to work on his chemistry with Pickett, who still has not had as many first team practice reps as Match Trubisky had going back to the offseason, is the biggest objective in a season that he has referred to as a ‘rebuild.’

“(We’re) just able to be around (Pickett) a lot more and just figuring out the situation, where to be in the right spots and stuff like that,” Johnson said. “It’s just helping us out a lot and you see that we were moving as one, as a unit.