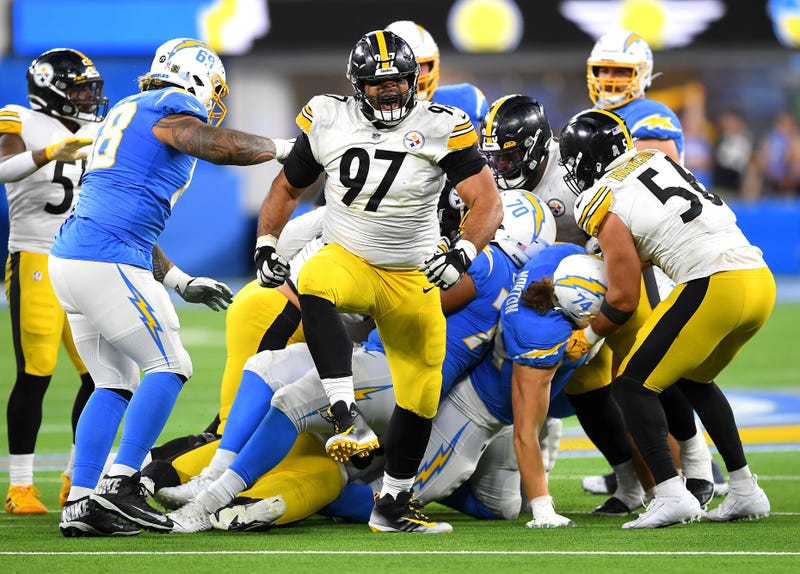 PITTSBURGH (93.7 The Fan) – Steelers defensive captain Cam Heyward said he reached out to Chargers quarterback Justin Herbert on Instagram and will likely attempt to contact him somewhere down the road following the personal foul on him late in the game Sunday.

Heyward said Thursday he saw the film and said he didn’t even really know what exactly happened on the play.

“I’m never going to try to be a dirty player,” Heyward said.  “I never want anyone to think I am.  I was already tired running down there in the first place.  I was more ticked off when I got pulled up because I was trying to catch my breath.”

“In slow motion it looks way worse.  I was honestly trying to catch my fall.”

Heyward said he can’t change people’s opinions, but doesn’t want to be looked at as dirty player.

It wasn’t memorable maybe because it was 11 years ago or because they still had Casey Hampton, Brett Keisel, Aaron Smith and Steve McLendon.  But Heyward said his first season was a struggle playing only limited snaps, finishing with a sack and 11 tackles the whole year.

“Do I remember being a rookie,” Heyward said.  “Mitch (former defensive line coach John Mitchell) yelling at me all the time.  Having me in for extra meetings & thinking I would never play here.”

“I remember that, living on the South Side and being depressed every day after practice because I’m not playing.”

“I think everything becomes worth it, earned.  The thing I appreciate about Coach Mitch, he challenged me to come back better every time.  It made me work twice as hard.  It gave me the opportunity when I was ready to play to actually seize that moment.”

Unlike those in this year’s draft class pushed to play out of necessity as much as anything.  The Steelers had depth then and despite being a first-round pick, Heyward had to wait his turn.

“I remember being in that corner, Mitch working me like a dog and being like, man, I just want an opportunity at this,” Heyward said.  “Finally got an opportunity in year three, 2015 vs. the Jets.  I made sure I was going to take advantage of that.”

It’s come full circle to the point that not only does Heyward play nearly every snap at 32-years-old, he gets extra attention.  That not just because of the level of his play, which is arguably tops in the NFL.  Its due to the loss of veteran defensive linemen Stephon Tuitt for the season so far and Tyson Alualu for most of it.

“You have to be ready for the moments you do get,” Heyward said.  “There aren’t many times you are getting a one-on-one, when you do get them, you have to capitalize on them.  Double-teams are part of the game.  If you are beating double-teams, you are doing something right.”