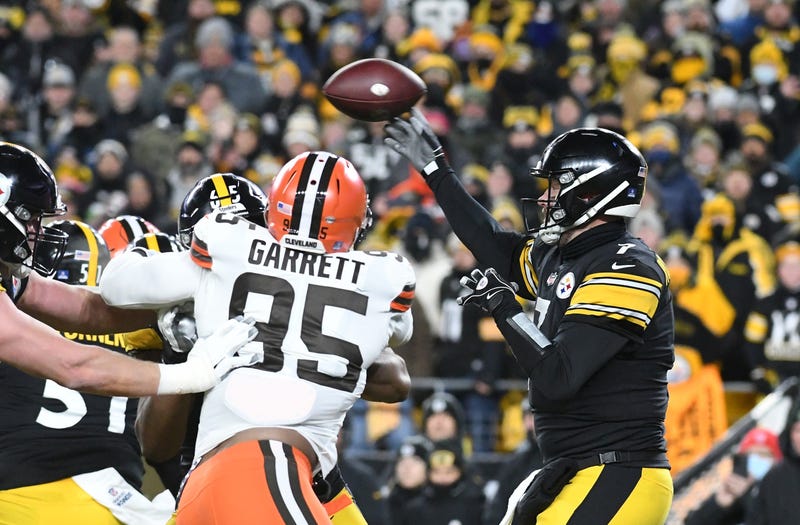 PITTSBURGH (93.7 The Fan) – So much scrutiny on the offensive line. How in the world is Steelers second-year left tackle Dan Moore going to block Cleveland’s All-Pro Myles Garrett Thursday night?

Their last matchup, the Steelers won the game, but Garrett had success.  The Browns star had a sack, three hurries and beat Moore eight times in 36 pass-blocking attempts.  The percentage works out to 13.9 of his snaps, Moore allowed pressure which gave him a Pro Football Focus pass-blocking grade of 0.0.

“It’s improving every single time I go out there,” Moore said.  “I want to improve on the last performance I had against him.  That’s my motivation this week.”

Both played at Texas A&M but not at the same time.  Also, both went in a different part of the draft.  Garrett the number one overall player chosen in 2017, while Moore went in the fourth round.  Moore said they never had interaction as Garrett was heading out when Moore was being recruited.  He did call him a ‘cool dude’, but a big challenge.  Adding there is no player in the league that can match his athleticism at that position.

“He’s really explosive,” Moore said.  “He’s really fast off the ball.  He has really good bend.  Knowing what he has and how you are going to attack him (is the first step).”

Moore said in his first game against him what first stood out is how smart he is.  He said Garrett picked up the cadence of Ben Roethlisberger quickly and it was like he knew when the snap was coming the same time as the offense.

“I got to execute technique and get off the ball,” Moore said.  “He’s got a really good get-off.  Also use the help that I will get to my advantage.”

He says he will get help and not be on an island with Garrett Thursday night.  Whether that’s tight end Zach Gentry or fullback Derek Watt on the left side, saying it will be similar to the help he got against Cincinnati’s Trey Hendrickson.

The Bengals edge rusher had no sacks in the opening game.  Moore currently grades out as the NFL’s 14th best tackle against the pass, albeit through two games.

“I think of it like me versus me,” Moore said.  “It’s me executing my technique against him.”

It’s also not solely only on him.  It’s also not just on his help.  It’s on all 11 especially winning first and second down so the Steelers don’t spend the day trying to fight off Garrett on third and longs.

“I’m not going to say it’s a normal game.  It’s a division game, we know what we are going to get and obviously I’m playing against a good player. You can’t think about it too much.”