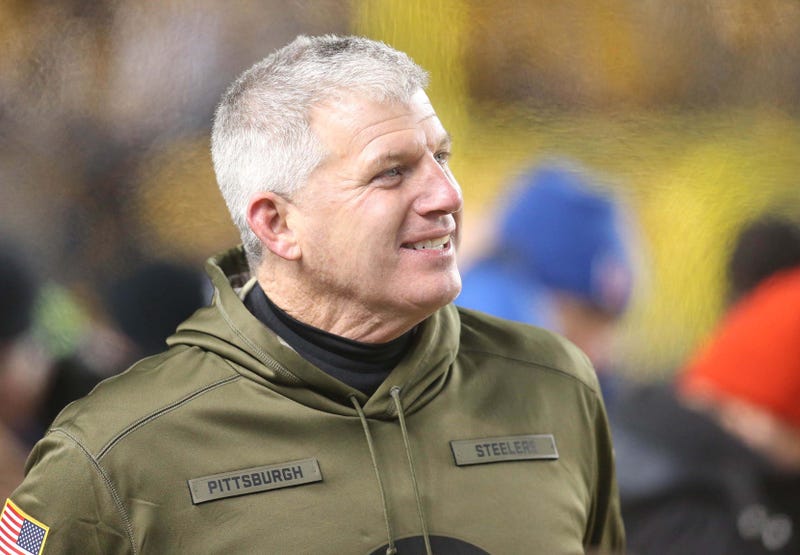 PITTSBURGH (93.7 The Fan) – Pro Football Hall of Famer Mike Munchak hinting on the Cook and Joe Show on 93.7 The Fan Friday that the Steelers called him about returning as the offensive line coach in 2022.

“We talk…” Munchak told Ron Cook and Joe Starkey then quickly stopping and adding “that’s one of those things I don’t really want to talk about.  I was more at the time, trying to stay in Denver, out West.  It’s something we never really discussed because, as much as I loved Coach Tomlin, there is no better head coach in football as a player to work for or as a coach to work for.  I learned so much from him and the Rooney’s and the way they run their organization.  For me that was a great learning experience.  I learned a lot from my years there.”

“At the time I was trying to stay out West.  It was not something I was considering at the time when they may or may not have had an opening.  I was 100% focused at trying to stay out in this part of the country.  It didn’t quite work out this year for that to happen.”

Munchak did not close the door on returning to the Steelers, or really anywhere.  The 62-year-old former NFL head coach is not retired.

“Hopefully if the right opportunity comes up this year or next year, whenever, I would continue to coach.”

“I’ve been blessed to always have a job, so much is about the opportunity, the fit, the timing.  The timing unfortunately wasn’t great for what was going on in Denver (the last few months).  My family is here.  Having the opportunity to work in the same city that your family is in is a rare opportunity.  I was hoping to keep that going.”

“Unfortunately, that did not work out this year, but I’m hoping to continue to work.  We will see what happens in the future.”

The Penn State great reiterated he only left the Steelers so he could be with his daughter and grandkids in Colorado.

“My years in Pittsburgh were awesome,” Munchak said on the Cook and Joe Show.  “My five years there was something I will never forget.  The hardest thing I ever did was leave there.  It was a family decision more than anything.”

Munchak will be back in Pittsburgh to help instruct ninth grade to senior offensive linemen at the Joe Moore Offensive Line Camp at Moon High School June 4th and 5th.

He never really knew Moore, but said he heard so much about him from a distance and got to learn what a legend Moore was.  He wants to help pay it forward, but says he still learns techniques, fundamentals and life-lessons listening to those volunteering their time.

The list of instructors along with the Hall of Famer Munchak is impressive:

It also includes a dozen other former NFL players and coaches.  For more information www.joemooreolinecamp.com