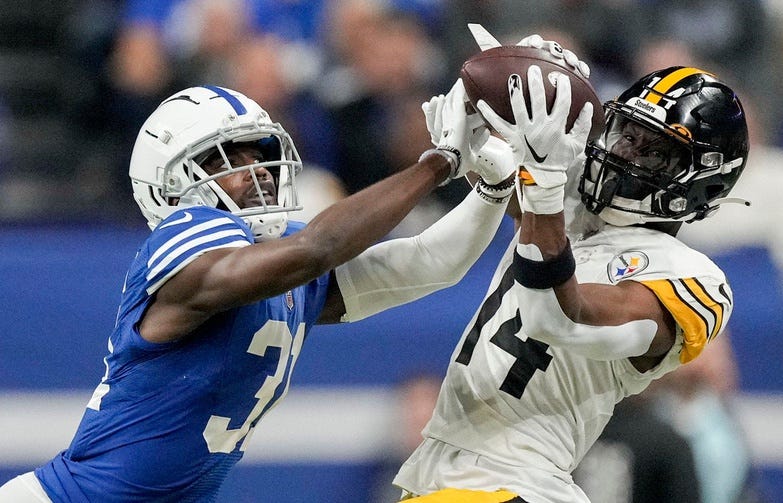 It’s almost getting to be a bit too common. George Pickens, master of doing things with his human body that makes you wonder about that ‘human’ part, did it again.

With just over 13 minutes to go in the second quarter of Monday night’s win over Indianapolis, Pickens pulled in another one of his patented, highlight reel, ridiculously-hard-to-describe-in-print catches.

Pickens caught three passes for 57 yards and did have a couple of drops, but he also hauled in a key two-point conversion on an miplovides play by Kenny Pickett, extending the Steelers’ lead to 24-17 in the final quarter.

Pickens felt like Pickett has a chance to run for the score, but he’s alright with the end result being two points.

The two grabs were clutch of the Steelers in the victory — their fourth of the season. And Pickens, who battles a couple of drops in the game, recognizes the significance.

Only problem? That pesky third element, special teams. And it almost cost them.

Pittsburgh got continually burned in kick coverage, and allowed an 89-yard kick return to begin the second half that, at least for a while, appeared to flip the game.

The Colts, set up nicely on the return by Dallis Florwes, scored on the drive to reduce the Steelers’ lead to 16-10. Indianapolis scored on tis next offensive series to take a 17-16 lead before Pittsburgh rallied back.

“You know, I thought our kickoff unit has to be better,” Tomlin said. “I thought that was a catalyst for whatever got started with them in the second half. The field position component of it was a big negative. We got to get better there. The field positioning was a negative in that aspect of the game. That's what jumped out at me.”

It wasn’t all a disaster on special teams. Matthew Wight made a trio of field goals and the Steelers blocked a field goal attempt as the first half clock expired. But the 45-yard return average on kicks will need to be cleaned up, fast.

The bad news with the win? How it impacts the Steelers’ standing in the NFL Draft this spring.

Pittsburgh entered the game slated to pick fifth overall. With the win, the Steelers dropped to 12th overall.

At 4-7, they are tied with Las Vegas, Cleveland (whose pick belongs to Houston), Jacksonville and Detroit with a .364 win percentage.

The Steelers will face both Vegas and Cleveland, and also has games against other teams around them in the standings, like Atlanta and Carolina, in the coming weeks.

Steelers running back Najee Harris left the game late in the second quarter with an abdominal injury. He did not return.

“He’s being evaluated.” Tomlin said. “I don’t know the extent of that. I’m sure we’ll visit again (Tuesday) and I’ll have more information for you there.”

Tomlin did not acknowledge any other injuries after the game.

The positive? Well, with Harris leaving, and with backup Jaylen Warren out with a hamstring injury, the team again established a solid run game, putting up 172 yards and scoring twice on the ground.

Benny Snell rushed for 62 yards and a score, Anthony McFarland had 30 yards, Pickett had 32, and Derek Watt and Gunner Olszewski combined for 13 yards.

“(Anthony McFarland) is guy that’s always waiting and working for his opportunity. He did some things that we saw in team development in the pre-season that make him a little bit different than some of the other backs, things he’s able to do in space, the screen game, draw game. I just thought he was an asset to us.”

Pittsburgh has rushed for an average of 163.7 over the last three games.

Best quote from the room

“Keep fighting. That’s what coach was telling us. When everything is going down bad, that’s kind of hard to listen to. But that’s what we stood by.” - Pickens on what was said in huddle before Steelers’ come-from-behind touchdown drive.