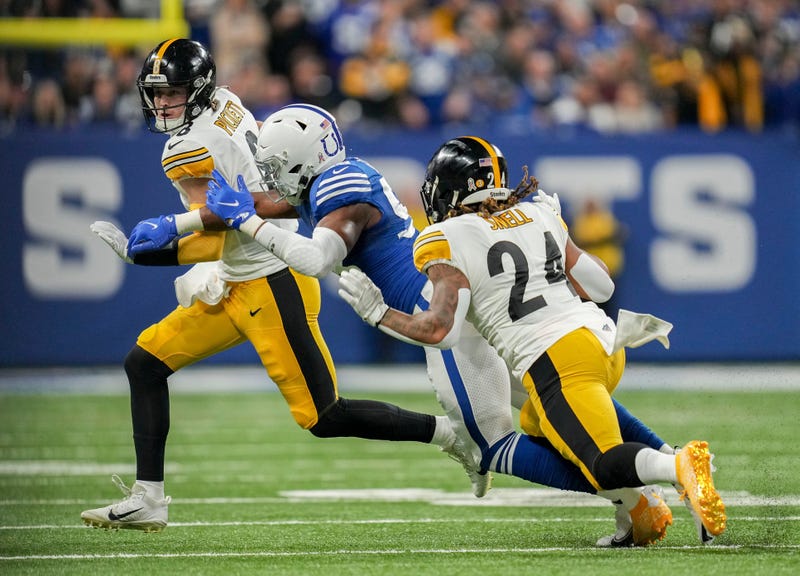 When the Steelers needed a big play, the biggest play of the game, Kenny Pickett knew exactly what he wanted it to be.

And all he had to do was hand the ball off.

Down 17-16 and facing a 3rd and goal at the Colts’ 2-yard-line, the Steelers put the ball in the hands of third string inning back Benny Snell, who bounced off the left tackle, picked up blocks from Dan Moor Jr. and Gunner Olszewski, and pranced into the end zone.

The Steelers, thanks to that play and the enduring two-point conversion, took a 24-17 fourth quarter lead that held up as the final score in their Monday night win in Indianapolis.

“The run we scored on, Kenny called it,” center Mason Cole said. “We had a timeout and Kenny was like, ‘I want to run this.’ I was all for it, because it’s a run play. But to see that confidence, on 3rd and 2, on the goal line, is big. It’s good to see, it’s exciting to see, and it really shows who he is, as a leader.

Pickett confirmed that the idea for the call — an unselfish one given the down, distance and situation — was his, and was supported by those around him.

“Coach (Mike Tomlin) puts a lot of confidence in myself, asking me what I like, what I don’t like,” Pickett said. “I feel like that play, just watching from tape all week, it’s a simple play but something I felt like other teams weren’t doing. I thought if we gave it a shot, we’d have been successful.”

Pickett indicated that Pittsburgh’s plan, somewhat surprisingly, was to go for the touchdown if a 4th down situation arose. But that never happened thanks to Pickett's unselfishness and decision to turn a crucial play over to a running back that was only in the game due to injuries to Najee Harris and Jaylen Warren.

“It’s got to feel damn good, right,” Cole said. “Kenny’s done a really good job all year just playing through the ebbs and flows of the game. We came out kind of slow in the second half. But to take the ball down, in the fourth quarter, and score, it’s big time by him.”

On that scoring drive, the Steelers converted a trio of 3rd downs, including the touchdown run. Pickett, on the first two, tossed a 13-yard pass to fellow rookie George Pickens on a 3rd and 9, and then slung a perfectly placed, 17-yard pass to tight end Pat Freiermuth on a 3rd & 6

“We have him in there because we think he’s capable of that, and so he proved it,” Tomlin said of Pickett’s first ever fourth quarter comeback. “I’m sure he’s going to get a lot of other opportunities moving forward to prove that. We need need people who run towards action, not away from it. And he runs towards it.”

Pickett appears to be gaining some more autonomy over the Steelers’ offense and play calling. But, that said, a similar situation did arise in the preseason, when Pickett requested — and was granted — a two-point conversion pass to Connor Heyward against the Seahawks.

That decisiveness — even if Pickett hasn’t been perfect with it all season — is impressive for the young passer.

“We have a great, open communication,” said Pickett, who has now thrown 100 straight passes without an interception. “I’ll went up to (quarterbacks coach Mike Sullivan) and coach Tomlin, and we had a conversation and that was the play I brought up. I felt really confident about it, and they felt good about it, too. So we rolled with it.”

The Steelers, for the first time since the end of the 2020 season, have scored over 20 points as an offense in consecutive weeks, and have racked up 74 points over the last three games.

It’s not exactly the ‘Greatest Show on Turf,’ but it does seem to be progress for the offense, and particularly for Pickett, who is trying to pull the Steelers — now at 4-7 — out of the cellar. And he's doing it by getting better, one step at a time, one decision at a time.

“He’s getting better every week,” Tomlin said. “And it’s in a very natural way because of experience. He’s a competitor, he’s smart. But there’s still a lot of meat on the bone. It’s just the process. But he’s good enough and we’re good enough to win as that happens.”