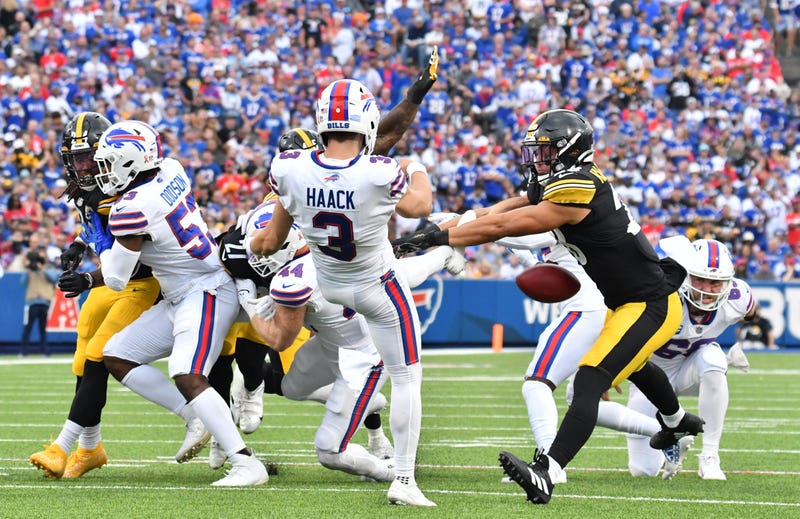 PITTSBURGH (93.7 The Fan) – There is no doubt the fourth down tackle for loss by Cameron Sutton was huge. The ensuing Diontae Johnson touchdown catch, amazing. The Cam Heyward with help from TJ Watt sack on the following series clutch.

It was the blocked punt by Miles Killebrew and Ulysees Gilbert scooping and scoring that really put doubt into the Bills stadium Sunday.

“We are just as special as offense and defense and our part of the team matters as well,” Gilbert said Monday.  “We know that we can change the game around with whatever we do as well.”

“You want to change the game any way you can,” Killebrew said.  “I love that it was able to happen this last game.  We are looking to keep making an impact as a team to help our team out any way we can.”

Killebrew said special teams coach Danny Smith drew it up well during the week.  He believes they knew exactly what they should be doing and that keyed the play.

“I know a lot of guys don’t know how things happen on special teams but it’s very rarely one guys’ victory when something big happens,” Killebrew said.  “This is one of those moments where it was a culmination of a lot of guys doing their job.  I just happened to be at the point of attack.”

“I thank God for the opportunity,” Gilbert said.  “I don’t think it really set in for me until I got to the sideline and sat down.  To see all the guys so excited.  To have all my teammates come around me and we were just all excited about making a play.”

“It was amazing to me.  It’s something I will remember forever.  Not just because the game was so big, just because playing with your brothers.”

Both players admitted to a feeling of redemption after allowing a 75-yard kickoff return to open the game.  That they took it personally.  Then late in the game Smith and head coach Mike Tomlin saw the opportunity to gamble.

“I’m originally from Las Vegas,” Killebrew said.  “I see guys in that casino all the time.  The odds of you winning a number on roulette are very low.  But you don’t put that money down thinking you are going to lose.  I would say that’s a fair comparison to this.”