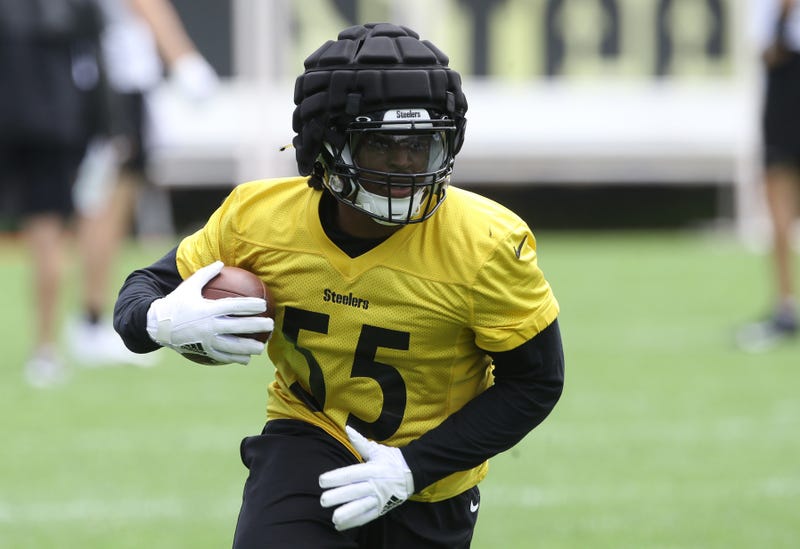 PITTSBURGH (93.7 The Fan) – Coming off a short week, the Steelers had only one player listed on the injury report before playing at Cleveland Thursday night. And he is going to play.

Linebacker Devin Bush left the game late against New England, but listed as a full participant in practice on Tuesday.  The only practice before the Browns game.

Bush has nine tackles through a pair of games this season.

It’s not just receiver George Pickens who is frustrated over not getting the ball more.  The team’s leading receiver, Diontae Johnson admits frustration is going around the group right now with just a pair of offensive touchdowns.

“Just a little bit, everybody has a lot of emotion, egos on teams,” Johnson said.  “You don’t want to let that negative energy going around and show that it’s bothering you.  Obviously, everyone wants to win.  Everybody trying to take the right steps to win.  I feel like we are going to be straight.  Come on Thursday and turn around and have a way better performance than we did on Sunday.”

“We have to find ways to get them the ball and get it in space and make the right plays at the right time,” said Steelers Offensive Coordinator Matt Canada.  “They all want the ball.  Any quarterback has played with talented receivers, they all want the ball all the time.  Najee wants to run it all the time.  When you are not playing well, those things occur.  I don’t think that’s a major issue.”

Only giving up 37 points through two games and one of the touchdowns on a 10-yard drive, Steelers Defensive Captain Cam Heyward said it’s on all of them when they struggle.

“We have to do a better job of being complimentary,” Heyward said. “There are growing pains that are going to happen. New QB, new pieces on O-line, we all have to be responsible for it.
Offense is going to take its lumps, I'm not running away (from responsibility) on defense"

Rookie defensive lineman DeMarvin Leal, brought in to be a more defensive tackle, played some outside against the Patriots Sunday.

“Big opportunity, just trying to find different ways to get on the field,” Leal said.  “Tried to stick to my keys, talked to TJ and Cam.  It’s a new position.  It’s not the technique that I was focused on throughout the whole rookie camp and OTAs.”

Leal said he’s able to play many positions because he’s always played a lot of positions coming up through football.  As for being unable to stop the Pats at the end of the game running the ball on Sunday.

“I would say conditioning, finishing,” Leal said.  “It was pretty tough watching that last little drive.  It’s conditioning, after practice run, run, run.  Just make sure when it comes down to the fourth quarter, if they are running the ball, we are able to stop them because we are in shape.”