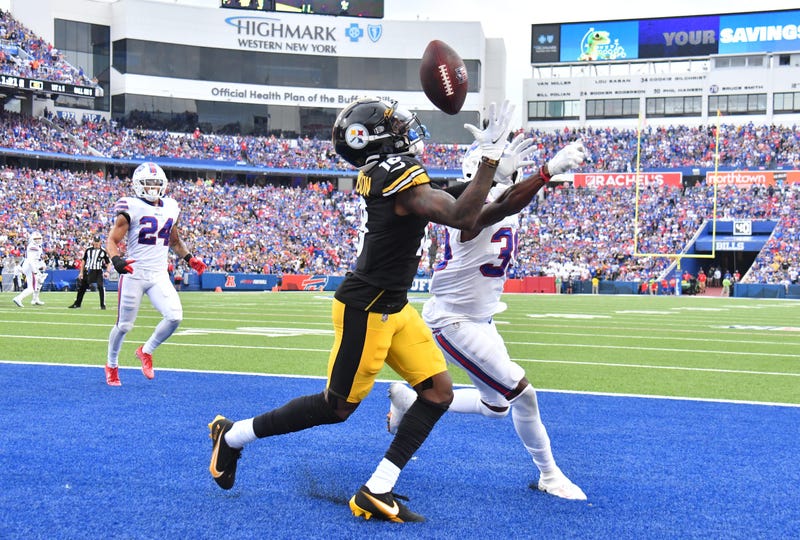 BUFFALO, NY (93.7 The Fan) – It was the Steelers only offensive touchdown and what a play it was as the Steelers pull the 23-16 upset win in Buffalo.

Offense struggled to barely 50 yards in the first half and while moving the football, had to settle for field goals in the third quarter.

Early in the fourth, Bills decided to go for it 4th and 1 around midfield.  Cam Sutton made an amazing defensive play on a pitch for a 7-yard loss on a Matt Breida run to give the Steelers the ball at their own 48.

First play is a two-yard loss on a pass to Zach Gentry.  Feeling among Steelers fans they would waste another opportunity.  Najee Harris would rush for five yards.  On third down, Buffalo corner Levi Wallace interfered with Chase Claypool.  Harris would bust free for his biggest gain of the day, 18 yards to the Bills 5.

Red zone shot again.  This time on the first play, something designed for Diontae Johnson.

“We knew what the call was,” said Steelers quarterback Ben Roethlisberger.  “Told him to be patient, sometimes he can be impatient with the double move route.  He did.”

“His ball skills are through the roof.  Ball got tipped up, he was able to catch it and get two feet in.  Just awesome.”

“It was just really concentration for real,” Johnson said.  “Keeping my eyes on the ball throughout the whole play and just making a play.  Taking a lead at that.  I just talked about someone had to make a play.  I just stepped up.”

Last year in this same, but empty stadium, Johnson benched for dropping a couple of passes in the first half of a key December loss.  Sunday, he made up for it.

“It was a big game for me,” Johnson said.  “I know I had to bounce back from last year.  I was able to do that.  Make my plays and help the team win.  That’s what I’m happy about.”

“He’s a phenomenal football player,” Roethlisberger said.  “He’s an incredible talent.  He’s one of those guys, you get the ball in his hands and sit back and watch.”

Johnson finished with a team-high five receptions and this time in Buffalo, when he needed to make a play.  He made it in spectacular fashion.