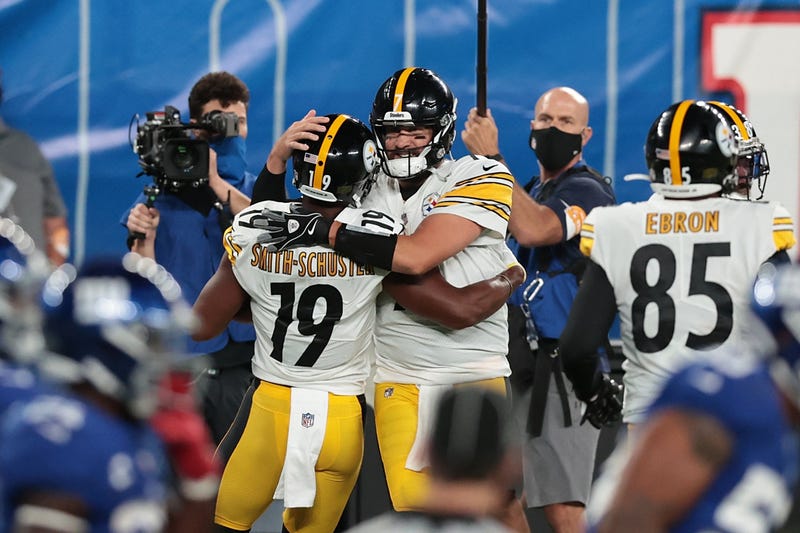 PITTSBURGH (93.7 The Fan) – It wasn’t a quick return, but a key drive at the end of the first half and not making any huge mistakes was key as Ben Roethlisberger returned in a Steelers opening day win, 26-16 at the Giants.

“It’s good to work on things with a W,” said head coach Mike Tomlin.  “It’s awesome to have our quarterback back and the things that he does and the manner in which he does them.”

There were needed improvements, the first drive was a three and out, then after a spectacular catch by Chase Claypool kept the second drive alive, it stalled, settling for a field goal.  Then another three and out before touchdown passes to JuJu Smith-Schuster and James Washington, on a great individual effort with seven seconds left in the first half.

“That was a good drive for us, they guys were protecting up front,” Roethlisberger said.  “My job is just to get it out of my hands and get it to our playmakers.”

“Kind of started off slow on the offensive side,” said receiver JuJu Smith-Schuster.  “Once we picked it up and Ben figured out what he liked, we executed simple plays and went out there and dominated.  Ben’s always been Ben as you saw today.”

Roethlisberger finished 21 of 32 for 229 yards with three touchdowns and no interceptions in his first game back from missing a year following a major elbow injury.

“I feel great right now,” Roethlisberger said.  “Obviously, adrenaline is still pumping and we won the game.  I will be sore tomorrow, there is no doubt, but in terms elbow and everything else, I feel really good right now.”

In his 17th year, Roethlisberger clutched the game ball walking off the field like a rookie trying to show he won’t fumble.

“I told the guys before the game it’s not about me, the reason I came back is for these guys, for this team,” Roethlisberger said.  “It’s a special group of football players and men.  I’m just thankful to be a part of it.”