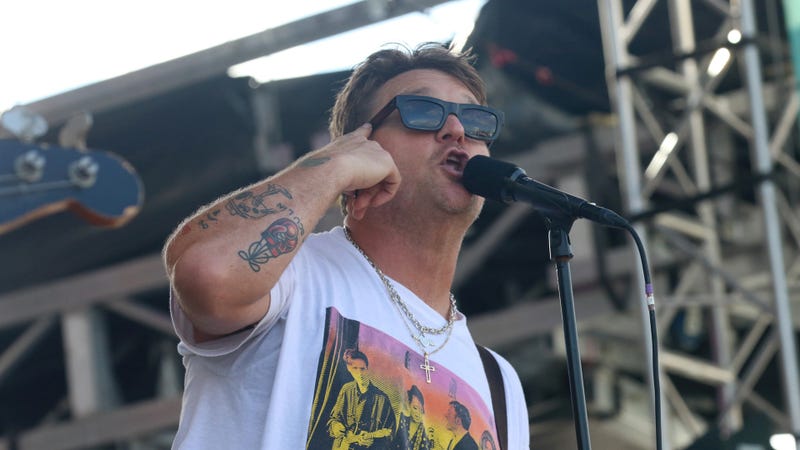 Reporting from backstage at the third installment of Redondo Beach, California’s BeachLife Festival this past weekend, Audacy’s Megan Holiday got a chance to talk with Cold War Kids about the incredible experience and some of the band's collaborative projects that have recently dropped.

Finally back on the road in a more regular capacity, Cold War Kids still find the experience of performing up close in front of live audiences "very strange." Singer Nathan Willett explains, "the tour we did at the end of the pandemic, if there was such a thing, we did a Kings Of Leon tour and immediately it was like 20,000 people all over the south and east coast. The intensity of that experience, of not being around crowds for so long and just immediately being in a group of people that large… it was crazy. There’s nothing like it."

The band followed up the past few years of their New Age Norms series of releases with a number of amazing collaborations, one of which was with Canadian rockers Arkells on "Past Life."

"They had approached us, and thrown out this song," Willett explains. "I like how they work, it was very fast. They were working in a studio in L.A. and yeah again, like pandemic time, where I kind of walked in there and was like, 'OK let's do it!' It's cool, this concept of 'Past Life.'"

He had this lyric in the first verse, that was like ‘I’m a little Wallflower singing ‘One Headlight,’ and was like, ‘whoa I like that,’ so I quickly wrote this verse… We’re huge Bob Dylan nerds, so I had this line like, ‘I feel like Bob Dylan’s son, always in the shadows…’ and in this thing of past lives, I like the idea of playing into that father-son thing and the past life thing, and the song came out great.”

It’s all coming down to having fun as artists again after such a long pause. “That totally was the intention,” says Willett. “It’s strange to make the plans like, ‘let’s go shoot a music video’ and to have the attitude of with pandemic and all things considered, to just kind of do it to do it and have fun. We’ve been doing a lot of, I guess for lack of a better word, ‘little things,’ one-off things, not like a whole record campaign."

"We did this song with The Knocks, ‘Nobody But Me,’" Willett continues, "that came out really cool and just was another… the pandemic was kind of a perfect opportunity to be collaborative with people. For that song, I was never in the room with them... getting to do stuff like that that we in some ways just didn’t maybe have the time, or wasn’t on our radar as much, it definitely forced us to be creative and find new ways to get music out.”

Listen to the full interview with Audacys Megan Holiday and Cold War Kids above and take a look at more exclusive chats from backstage at BeachLife.

While you're in the mood, check out and favorite some of Audacy's all-new statios like Alt Now, Rockternative, Drivin' Alt, New Wave Mix Tape, '90s and Chill, Alterna 00s, and ALT Roots -- plus check out our talent-hosted Kevan Kenney's Music Discovery, Megan Holiday's My So Called '90s Playlist, and Scott Lowe on the Go's Post Modern Music Box!