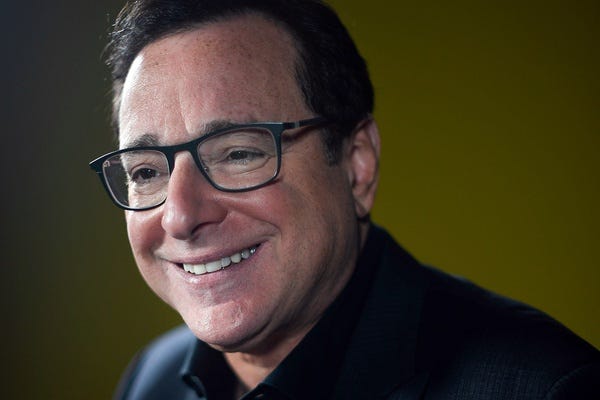 PHILADELPHIA (KYW Newsradio) — It was a shock to the entertainment industry when America’s dad, Bob Saget, died suddenly while on tour at the age of 65 on Sunday.

Since then, there has been an outpouring of love and memories about what a truly kind and wonderful person Saget was, not to mention his personal ties to Philly, and our own Jeff Asch.

For those of us who grew up in the ’90s, Saget was synonymous with wholesome humor, but quickly we realized that there was a raunchy, blue side to him, too. And that made everyone love him all the more.

In honor of the man who could make us cry as Danny Tanner by day and howl with laughter in his stand-up by night, we’ve compiled a list of his legacy that’s available to stream right now. From the classics to R-rated cameos to a passion project close to his heart, here’s how you can watch the best of Saget’s filmography.

What better place to start than the shows that made Saget synonymous with Danny Tanner? For decades, Saget wore his badge of sitcom dad honor with pride, and TGIF would not have been the same without the widowed patriarch, shepherding his three daughters through adolescence with help from his two slightly less experienced friends (Dave Coulier, John Stamos) — and non-stop pestering from neighbor Kimmy Gibbler (Andrea Barber).

Twenty years after “Full House” aired its finale, Saget was all too eager to reprise his role on the Netflix sequel series, “Fuller House,” that saw DJ (Candace Cameron Bure) raising her own family in the same Painted Lady San Francisco home that Danny raised her in.

Luckily, both shows are available right now in their entirety on two separate streaming platforms, so “everywhere you look,” you can find some ’80s and ’90s nostalgia.

Before there was YouTube to host viral cat videos, there was “AFHV.” Each week, host Saget would take American audiences (and a live studio one!) through a smattering of thematically linked home caught-on-camera fails. Topics include: accidental falls, people getting hit with balls in painful places, bathroom mishaps, animal mishaps, just general mishaps, and the list goes on, and on, and on. Ultimately, one family would take home a prize for sharing their traumatic experiences with a national audience.

“AFHV” has been on the air since 1989 and is still on air today, with Saget serving as the inaugural host for the first eight years. Its staying power as a mainstay on TV is a testament to the foundation Saget created, with his commitment to cheesy jokes and silly voices narrating each and every cringe-worthy montage.

“America’s Funniest Home Videos” is streaming on Disney + and has Saget-era clips available on its YouTube channel.

How I Met Your Mother

While we never actually saw Saget as an older Ted Mosby, his kind, expressive voice narrated the character’s quest to find his one true love over the course of nine seasons. Josh Radnor, who played young Ted, wrote a Twitter thread honoring his “older wiser” self, which tells you everything you need to know about Saget’s impact and value to the long-running sitcom.

“How I Met Your Mother” is streaming on Hulu and Prime Video.

Enough of the PG stuff! Saget appeared on a handful of episodes playing a fictionalized, much more awful version of himself, as Vince’s (Adrian Grenier) crass celebrity neighbor. We’d recap some of his best moments here, but then we’d have to wash our mouths out with soap, so you should probably just see it for yourself.

“Entourage” is streaming on HBO Max. For all of Saget’s fame regarding his comedy, both R- and G-rated, he was, by all accounts, a kind, thoughtful and loyal father, brother and friend. “For Hope” is probably the best example of this in film form.

Saget’s sister, Gay Saget, was a Philadelphia-area school teacher who died from complications of systemic scleroderma, an autoimmune disease that affects the body’s tissue, in 1994. To honor her memory and story, he directed “For Hope” in conjunction with the Scleroderma Research Foundation, and it aired on ABC as a TV movie in November 1996.

The film is based on Gay’s experience and chronicles her battle with the disease as she and her family cope with the fatal diagnosis.

“For Hope” is streaming on the Scleroderma Research Foundation’s YouTube page as well as Amazon Prime.

For many, it was almost a rite of passage: “Where were you when you saw Saget curse in ‘Half Baked?’ ”

But for those who grew up with the family-friendly Saget of “Full House” and “America’s Funniest Home Videos,” it was a huge shock seeing him stand up at a Narcotics Anonymous meeting and shout… something we cannot print here.

Saget was only one of a truckload of celebrities with cameos in Dave Chappelle’s madcap marijuana comedy. Others included Snoop Dogg, Willie Nelson, Steven Wright and Jon Stewart (“You ever see ‘Scent of a Woman’...on weed?”).

But it was Saget who broke a lot of teenage brains with his game skewering of his mainstream image. You can never forget your first time seeing it.

“Half Baked” is available to rent on Prime Video.

After “Half Baked,” Saget no longer seemed shackled to Danny Tanner, and he was free to be his unabashedly filthy self. A year after leaving “America’s Funniest Home Videos,” the comic made his debut as a feature film director — and what a debut.

Writer and star Norm Macdonald tapped his friend Saget to direct the story of Mitch Weaver, a snarky loser whose sole talent is getting revenge. Mitch and his best friend Sam decide to start a revenge-for-hire business, which goes through the roof.

But despite hysterical co-starring turns from Jack Warden, Chevy Chase, Don Rickles and Chris Farley (his final film), “Dirty Work” failed to do the same at the box office. It’s since become a cult classic for its gleefully sleazy spirit and smirking style. It’s a movie only Saget could have directed.

If you’re into toilet humor, you’re in luck. This “Dumb and Dumber” prequel from 2003 follows the OG characters in their high school years and the superbly stupid antics that follow — like a bathroom covered ceiling to floor in feces.

Saget plays the father of the girl Harry and Lloyd (Derek Richardson and Eric Christian Olsen) have crushes on, and his outrage over a melted chocolate bar is, well, understandable, for starters, and also downright hysterical.

“Dumb and Dumberer: When Harry Met Lloyd” is streaming on HBO Max.

Penn Jillette and Paul Provenza’s documentary about the dirtiest joke of all time features a murderers row of comic talent, which makes it all the more impressive when Saget upstages just about all of them.

“The Aristocrats,” as explained in the movie, is a famous backroom joke with a singular setup and punchline. A family walks into a talent agent’s office, but after that, it’s up to the teller to improvise a scenario repugnant enough to render the punchline (“What do you call yourselves?” “The Aristocrats!”) utterly ridiculous.

But Saget takes the gold. He breathlessly rattles off mounting atrocities backstage while horrifying even himself, then hits the iconic punchline just seconds before he does a set. That’s a real pro.

“The Aristocrats” is streaming on IMDb TV.

Honor the memory of Bob Saget by laughing your ass off. pic.twitter.com/C4BgcHhBLd

If you really want to get a taste of Saget’s comedy style, there’s no better place to look than his stand-up. His specials reveal some seriously foul-mouthed, adults-only material, so much so that you’ll be shouting “have mercy!” back at the screen.

Then the tables turned on him, where friends and fellow comedians lambasted him on a fan favorite episode of “Comedy Central Roast.”

Of course, he throws in some touches of TV dad wisdom every now and then, too. And we love him for that.

“​​The Comedy Central Roast of Bob Saget” (2008) is available to stream on Paramount+.