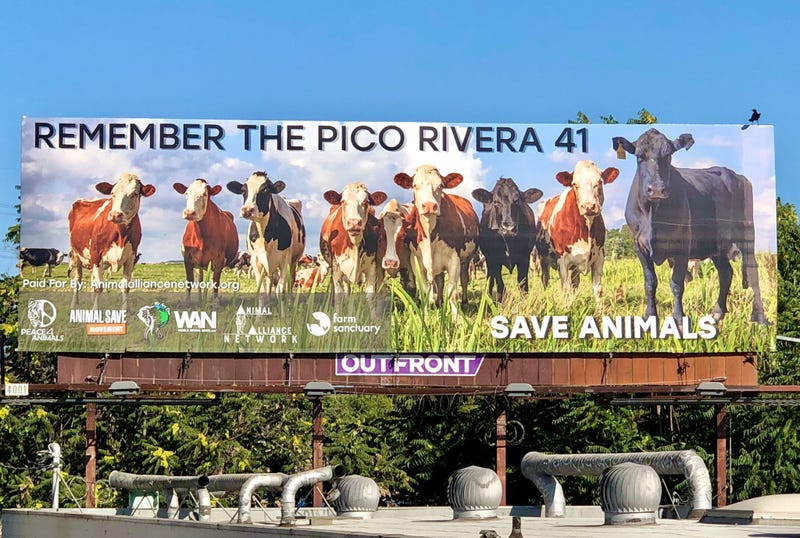 Animal-rights activists purchased space on a billboard in Pico Rivera paying homage to the 41 cows that escaped a local slaughterhouse.

The space features images of several cows standing in a field, with the messages to "Remember The Pico Rivera 41" and "Save Animals" displayed prominently.

The billboard, located on the corner of Beverly Boulevard and Di Maria Road, is near the Manning Beef facility where the cows escaped their containers and stampeded through Pico Rivera and Whittier in Los Angeles on June 22.

The cow when an employee mistakenly left a door open and stampeded through residential streets, causing property damage.

One cow was killed by a sheriff's deputy after charging at a family and one was recovered two days later in South El Monte and donated to Farm Sanctuary in Acton thanks to the efforts of famed songwriter Diane Warren and the group, Animal Alliance Network.

In a statement, Animal Alliance co-founder Ellen Dent said the billboard was a message that cows deserved the right to live.

“After personally visiting the slaughterhouse many times while advocating for the cows to be saved, I knew that this was a pivotal moment in time that had the ability to inspire significant change,” Dent said.

“The connection needs to be made that it is not `what' people are eating, it is `who' they are eating."

In addition to Animal Alliance, several other organizations helped design and sponsor the billboard that also features June B. Free, one of the cows donated to Farm Sanctuary in Action.

“But since we can’t rescue them all, we are grateful that these two intrepid cows will live in peace at Farm Sanctuary and serve as ambassadors for the millions more who are subjected to the abuses and terrors of our food system with no hope of running free.”