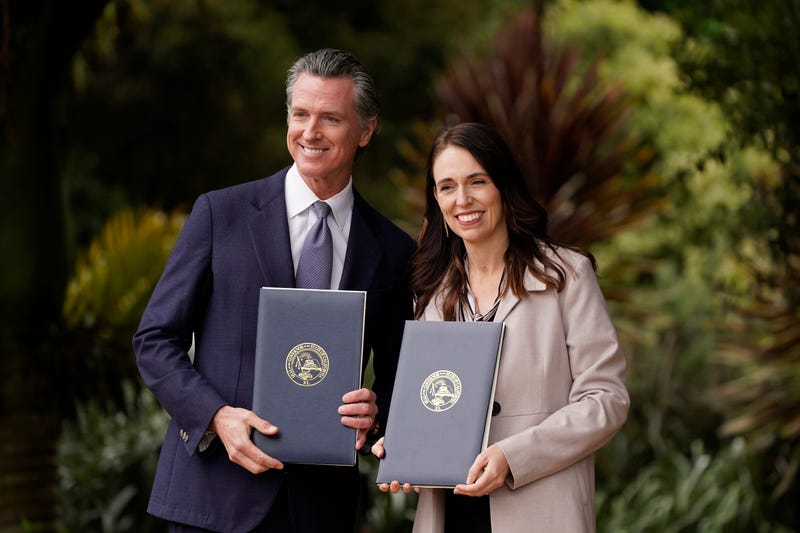 “We have a natural connection and I’m so pleased we’ve put pen to paper today to confirm that and continue our cooperation on one of the great challenges from our generation,” Ardern said.

Cars, trucks and other parts of the transportation sector are California's biggest contributor of greenhouse gas emissions, and New Zealand's second largest behind agriculture, Ardern said. California is moving to ban sales of new gas-powered cars in the state by 2035. New Zealand wants 30% of all car sales to be electric by that year.

Newsom said he expects competition to grow in the electric vehicle market, which Tesla currently dominates, likening it to when Netflix started facing competition from other streaming services.

New Zealand is home to 5 million people compared to California's population of 39 million and has a much smaller economy. Ardern said her government will talk with California officials about programs that offer incentives for people to get rid of older, gas-guzzling cars.

New Zealand is heavily focused on reducing emissions from its important agriculture sector.

California is also home to a major farming industry that produces many of the world's fruits and vegetables. The agreement says the two governments may engage in joint projects to expand farming practices that build soil health, reduce methane emissions and boost water efficiency.

The memorandum of cooperation was signed by Jared Blumenfeld, secretary of the California Environmental Protection Agency, and Jeremy Clarke-Watson, New Zealand’s consul-general in Los Angeles.

California already has climate-focused agreements with many other nations, including China, Canada, and Mexico.

Former California Gov. Jerry Brown, also a Democrat, helped launch a coalition of 270 subnational governments, aimed at keeping an increase in emissions to below 2 degrees Celsius.

At last year's global climate change conference in Scotland, California signed a brief joint declaration with New Zealand and the Canadian province of Quebec to share information on climate policies including carbon markets.

Because of Ardern's high-profile role in the wake of the 2019 massacre of 51 worshippers at two mosques in Christchurch, the issue of gun control was also expected to come up.

Newsom is pressuring the state Legislature to send him a package of gun reform bills in the wake of this week's killing of 19 children and two teachers at a Texas elementary school.

Less than a month after the Christchurch shootings, New Zealand's parliament voted to outlaw most automatic and semi-automatic weapons.

Newsom and Ardern did not publicly discuss gun control, though Ardern addressed her country's actions on the issue in response to a question about the “shared values” between California and New Zealand.

“It was clear that the New Zealand public expected its politicians to find solutions and quickly," Ardern said. “Now are they the answer to all of our issues as they relate to weapons in New Zealand? No, but they were practical steps that we believe were necessary, and that would make a difference. And so we made them."

Investigators say an 18-year-old gunman who shot and killed 10 shoppers at a supermarket in Buffalo, New York, targeting Black people, had researched the racist Christchurch shooting and also livestreamed the attack as the Christchurch shooter did.