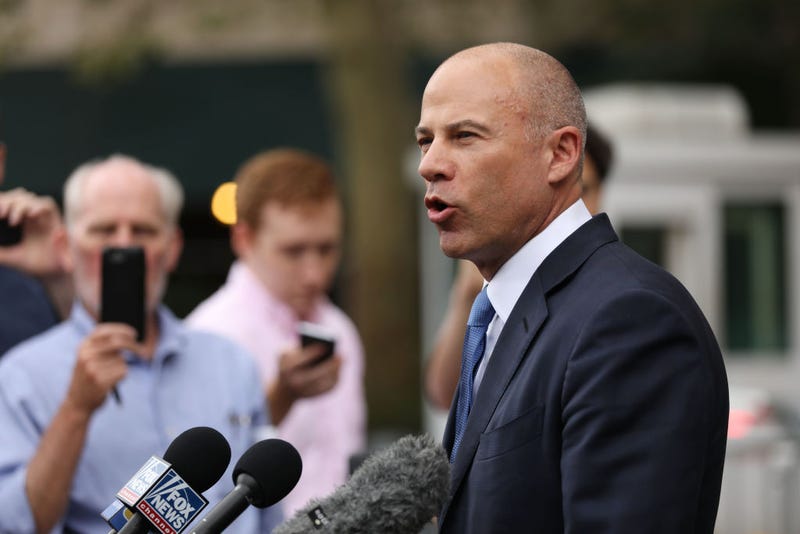 Michael Avenatti speaks to the media outside of a New York courthouse after a hearing in a case where he is accused of stealing $300,000 from a former client, adult-film actress Stormy Daniels on July 23, 2019 in New York City. The lawyer is scheduled to appear Wednesday in a Santa Ana court for his second trial in only a month. Photo credit Spencer Platt/Getty Images
By Clare Busch, KNX 1070 Newsradio

After the U.S. District Court Judge James V. Selna granted Avenatti’s request to represent himself, the lawyer appeared in a Santa Ana court for his second trial in only a month on Wednesday.

He denied any wrongdoing in his opening statements, saying, “Let me be clear. I did not defraud or steal any money from any client at all.”

Federal prosecutors argued that over a four-year period beginning in 2015 Avenatti cheated five clients out of close to $10 million in settlement funds with Avenatti using $2.75 million of one client's settlement to buy a private plane.

Prosecutor says @MichaelAvenatti repped @IPSY founder @MichellePhan for sale of her business for $8,146,000, but allegedly kept about $4 million for himself-- wiring her, just half of what she was owed. @KNX1070

Avenatti took a dramatic approach at times, saying "This case didn't start with a crime, it started with a target" before being interrupted by the judge.

"Mr. Avenatti, tell the jury what you're going to prove," instructed Selna.

Avenatti ended his opening statements with, "At the end of this case, I will rise before you again. We will go back to these charts, and I will ask you to find me not guilty." He spoke for a little more than 30 minutes.

"This case didn't start with a crime, it started with a target-- said #Avenatti-- Judge interrupts-- "Mr. Avenatti, tell the jury what you're going to prove." @MichaelAvenatti takes a breath, and adds, "and the evidence will show that." @KNX1070

Government prosecutors called their first witness, Patrick McNicholas, an attorney who practices law in California and worked on cases with Avenatti. McNicholas testified that he worked on a case with Avenatti's firm where their client won a $4 million settlement from LA County.

McNicholas said, "When you receive a settlement such as this one, that's client money."

Avenatti attempted to rebut the claim that he stole settlement money during his cross-examination of McNicholas, asking if he had been paid for his work on the case. McNicholas confirmed his firm was paid.

The Associated Press reported that lawyer H. Dean Steward, who is assisting Avenatti in the case, “raised concerns about the jury selection process and sought unsuccessfully to delay the trial, arguing that widespread publicity following Avenatti's New York sentencing could affect his rights in this case.”

The Associated Press left a message for Steward asking for comment, but the message was not returned.

The State Bar suspended Avenatti from practicing law in California.