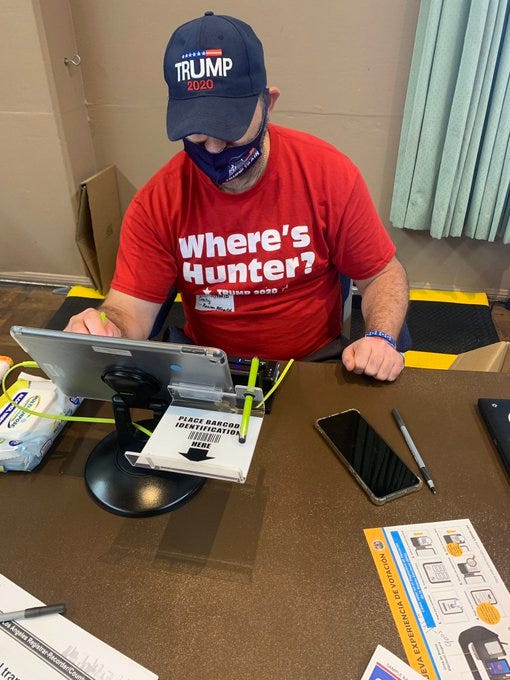 A poll worker in West Hollywood was dismissed from duty by county officials on Tuesday as locals cast ballots in the gubernatorial recall election.

The individual, whose name has not been confirmed, was reportedly manning a check-in station at the L.A. County voting location in Plummer Park on Monday evening.

It was around 6 p.m. that Frank Santoyo, a West Hollywood local, arrived to cast his vote at the polling location. He was handed a ballot by the individual in question, who was wearing a “Trump 2020” campaign hat and t-shirt emblazoned with “Where’s Hunter?”—a reference to the son of President Joe Biden, who is the subject of many right-wing conspiracy theories.

This was my poll worker yesterday in West Hollywood pic.twitter.com/KhiTQGg0OY

“I was just so taken aback,” Santoyo told KNX. He took a photo of the poll worker initially just to show family and friends. “It was so ridiculous.”

“But then I realized this might be a violation of some sort, so I called the county and lodged a report,” Santoyo said.

The L.A. County Registrar-Recorder and Office of the County Clerk, which administer elections, contacted the worker and advised him that his attire was “inappropriate and unacceptable.” Based on the individual’s response and reports from fellow poll workers that he had been asked repeatedly to refrain from wearing partisan-themed clothing while on the job, he was dismissed from volunteer duties.

California’s Election Code prohibits poll workers from wearing campaign-themed or partisan apparel of any kind, including t-shirts, hats, buttons and stickers. It also prohibits anyone from sporting such apparel, or engaging in other forms of partisan messaging, within 100 feet of a polling place, satellite location or election official’s office.