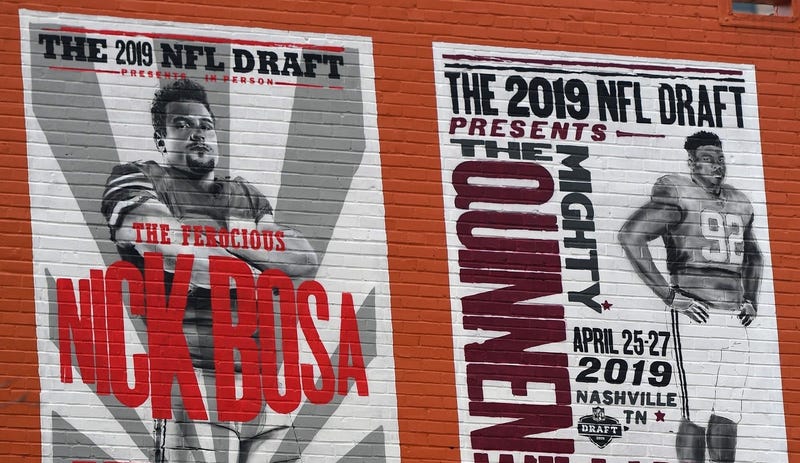 Let’s just say while you’re reading these words that John Lynch doesn’t exist and I'm the San Francisco 49ers general manager. Over the last calendar year, my scouting staff and personnel group have been working hard to put together our best draft as a staff in our three-year tenure. Now that it’s draft day we're on the clock, without further ado, here is the 49ers full seven-round mock draft:

Let’s not overthink this, it’s easy — the pick is Nick Bosa.

He’s as polished of an edge rusher as you can get at the college level. His hand usage and elite run stopping ability make him look like a savvy veteran. The injuries are scary, but Bosa is an elite prospect that the 49ers can’t miss out on.

This may surprise some that it’s not a receiver, but the depth at the wide receiver position is good enough for the 49ers to wait, while the interior offensive line class is thin. Thin to where Erik McCoy could be off the board, but if he isn't, the 49ers need to take him.

McCoy is a cerebral offensive linemen who knows how to attack the defense. McCoy is solid as a pass protector and can get out in space in a zone run scheme. McCoy also played both guard and center during his career at College Station. Weston Richburg, Mike Person and Laken Tomlinson have been up and down as the interior trio of the offensive line and in a division with Aaron Donald, Poona Ford and Jaaran Reed it’s probably smart for the 49ers to add a stable piece like McCoy.

This is best case scenario at pick 67 for the 49ers. JJ Arcega-Whiteside packs his bags in Palo Alto and moves down the way to Santa Clara. Arcega-Whiteside is one of the most talented receivers in the class, but gets shadowed by the “just a red zone target” label. Luckily for the 49ers, that could push him to 67. He’s a polished route runner that can line up all over the field and his technical release allows him to beat any defender off the line. Most important Arcega-Whiteside can find the endzone, he caught 28 touchdowns in seasons down on the Farm. Arcega-Whiteside and Dante Pettis would give the 49ers two creative young receivers

One of the most inconsistent groups on the 49ers roster resides in their secondary. Both the cornerback and safety positions have issues. In the fourth round, Lynch will have trouble finding a plug-and-play guy for their secondary, but Oregon’s versatile safety Ugo Amandi fits the bill. Amandi is quick to the football in space and solid in coverage wherever he lines up. Amandi can contribute to special teams right away while pushing Adrian Colbert at safety.

The 49ers tried to fill a hole with signing Kwon Alexander, but the 49ers still need depth at the linebacker position. Both Elijah Lee and Fred Warner show promise, but Ben Burr-Kirven is one of the most undervalued players in the draft. Burr-Kirven was a tackling machine for the Huskies over the last two season in Seattle, but where he’s special is in coverage. Burr-Kirven was a former safety who can run sideline-to-sideline with ease and physicality. Burr-Kirven could be one of the few starting capable players available late on day three.

Even with drafting Mike McGlinchey last year, the 49ers offensive line group is aging by the second. The 49ers address their offensive line by drafting one of the Senior Bowl’s small school standouts, Oli Udoh from Elon. Udoh is 6’6, 330 lbs and raw. Physical traits like Udoh’s make him an interesting prospect even into the sixth round.