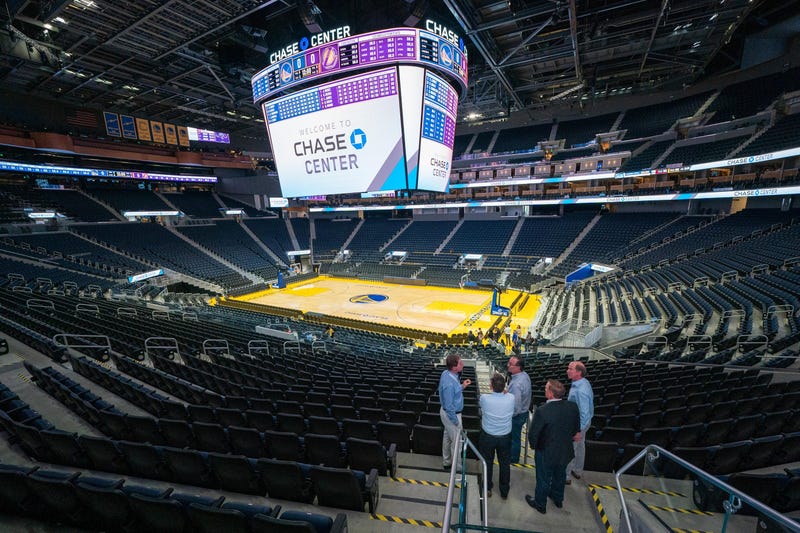 In the wake of Mayor London Breed announcing on Wednesday morning that San Francisco will prohibit large events of 1,000 or more people for at least the next two weeks, the state of California is recommending that gatherings of 250 people or more should be postponed or canceled, in an effort to slow the rate of transmission of COVID-19.

The Warriors drastically reshuffled the plans for upcoming games and events at Chase Center, in the aftermath of Breed's city order.

Then came the news that the NBA suspended the season, effective at the end of Wednesday. The Warriors "completely back" the decision:

With the escalating situation surrounding COVID-19, we find ourselves in a rapidly-changing environment. We completely support the NBA’s decision to suspend our season until further notice.The health and safety of our fans, staff and players is our top priority. pic.twitter.com/XOcwrG3W0I

The team had initially planned to the face Nets in an empty gym on Thursday and cancel or postpone all events at Chase Center through March 21. Here's how the first statement went:

"Due to escalating concerns about the spread of COVID-19 and in consultation with the City and County of San Francisco, the Golden State Warriors announced today that tomorrow night’s game vs. the Brooklyn Nets at Chase Center will be played without fans. In addition, all events through March 21 will be cancelled or postponed at this time. Fans with tickets to Thursday and Saturday night’s games will receive a refund in the amount paid. Guests who purchased tickets to a concert occurring at Chase Center during the impacted dates will be notified through the promoter directly to either receive a refund or exchange for a rescheduled show at Chase Center.

We will continue to monitor this evolving situation closely to determine next steps for future games and events. We appreciate the understanding and patience of our fans, guests and partners during this unprecedented time."

The effected events were as such:

(*Games will continue as scheduled without fans in attendance)

Marc Stein of the New York times was the first to scoop the news.

The Warriors, league sources say, will be directed to play host to the Nets on Thursday night at Chase Center in a game CLOSED to fans

Breed offered an extensive statement, in which she said she spoke with the Warriors regarding the newly-issused moratorium.

“We know that this Order is disruptive, but it is an important step to support public health,” Breed said. “We’re following the recommendations of public health officials to slow the spread of COVID-19 in our community. This order mirrors actions being taken by other local governments and is informed by the Centers for Disease Control and Prevention guidelines. We know cancelling these events is a challenge for everyone and we’ve been talking with venues and event organizers about the need to protect public health. Today I spoke with the Warriors to discuss the steps we’re taking to cancel large events and they are in support of our efforts.”

Per the official release, which can be read in full right here, the order goes into effect for two weeks at which point it can be reauthorized by the Heath Office.