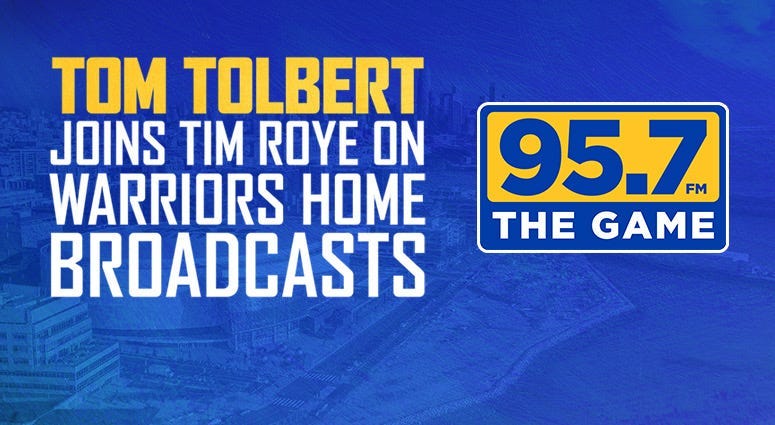 Tom Tolbert is joining Tim Roye for Warriors home broadcasts on 95.7 The Game. While Tolbert handles color commentary for the home slate, Jim Barnett will travel with Roye for road games throughout the season.

The Game is elevating its coverage this year, which will include Damon, Ratto & Kolsky live from Chase Center from 2-6pm prior to numerous home games.

SAN FRANCISCO, Calif. – Former Warrior Tom Tolbert will serve as the color analyst alongside play-by-play broadcaster Tim Roye for all Golden State home broadcasts on KGMZ-FM (95.7 The Game) during the 2019-20 regular season, the team announced today. Jim Barnett will join Roye as the color analyst for all the road contests during the upcoming 2019-20 regular season.

Tolbert, who served a color analyst on the team’s broadcast from 2013-16, spent three seasons playing for the Warriors from 1989-92. During that time, the Warriors reached the NBA Playoffs two times, including a trip to the Western Conference Semifinals in 1991. Overall, Tolbert played seven seasons in the NBA, averaging 6.5 points and 4.0 rebounds per game over 312 regular-season contests with the Charlotte Hornets, Orlando Magic, Los Angeles Clippers and Golden State Warriors.

For the fourth consecutive season, 95.7 The Game will serve as the flagship radio station for Warriors basketball, broadcasting all preseason and regular season games. Programming on 95.7 The Game will once again include an additional 60 minutes of coverage to each of the existing 30-minute pre- and post-game programs as well as heightened in-season daily Warriors coverage featuring both Warriors and NBA-themed shows.