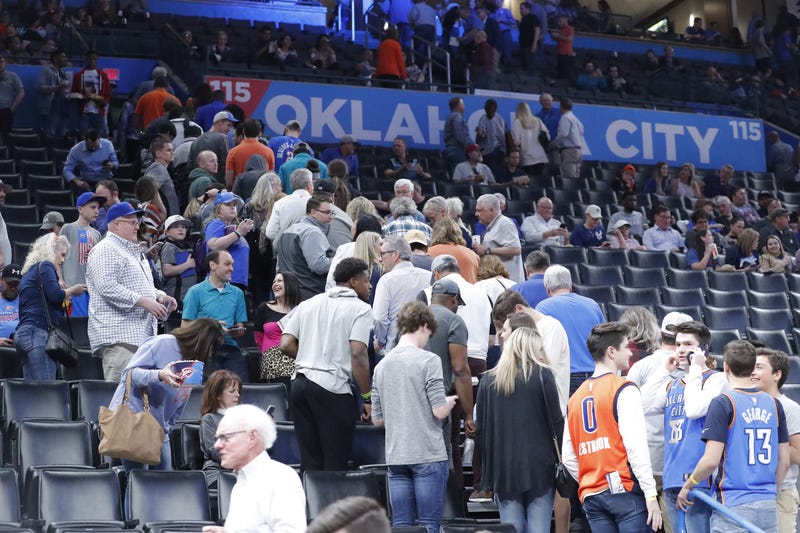 Stephen Curry pretty much nailed it. No surprise there, right? Saint Steph ALWAYS nails it.

And so it was, again, just before midnight Wednesday, a day that will surely go down in sports infamy. Saint Steph took to social media and punctuated the unprecedented, blink-and-you-missed-something-huge proceedings.

“2020 ain’t it,” his message opened. “... Just gotta buckle up and take care of yourself and those around you.”
I saw Saint Steph’s Tweet just before hitting the rack Wednesday, several hours after spending a fair amount of time on the phone with my editor, 957thegame.com digital guru and the stealth hardest worker in local media Karl Buscheck, discussing — and pardon my French in advance — what the f*** I was going to write in my “return” column.

It had been a while since I’d written for The Game’s website, which Karl has transformed from a strictly promotional vehicle, which is what most radio stations have as a web presence, into a portal of proprietary content that merits bookmarking.

Ray Ratto, the polarizing legendary Bay Area columnist, is now writing for the site once a week, and that, to me, is as clear a sign as any that what Karl and his crew have done commands attention.

Ray, no doubt, likely will roll his eyes upon reading the previous paragraph and say or think, in his inimitable, soaked with sarcasm style, “You do realize that YOU are now a promotional vehicle, right?”

Well, yes and no. Yes, in that I’m certainly going to sing our station’s praises when appropriate. No, in that I’ve essentially been given carte blanche to write — again, pardon my French — whatever the f*** I want.

That type of freedom is the Golden Ticket for a writer. And for a sportswriter it’s editorial bliss; in normal times, with the entire sports world from which to select a weekly topic, it’s heaven.

In the wake of Wednesday, “normal” no longer applies to anything.

Driving home that evening, I tuned into “Damon, Ratto and Kolsky.” They were offering up-to-the-minute updates on the breakneck developments, and just before getting out of my car they relayed that the Jazz-Thunder game in Oklahoma City had been “postponed.” Something about Jazz center Rudy Gobert, who on Monday had essentially mocked the growing concern about the coronavirus by touching every reporter’s microphone and recorder in front of him at the end of a press conference.

Thursday dawned with the news that one of Gobert’s teammates, Donovan Mitchell, has tested positive as well. The reporters who were at Gobert’s now-infamous presser are being tested, too.

This is the new “normal.” With more than 124,000 cases and 4,500 deaths worldwide, the World Health Organization officially declared the COVID-19 outbreak a global pandemic.

So much for my grand plans to bust out a hilarious version of “Good For Ball/Bad For Ball” for my comeback column.

Karl agreed. “This isn’t Bad for Ball,” he said.

“This is Worst for Ball.”