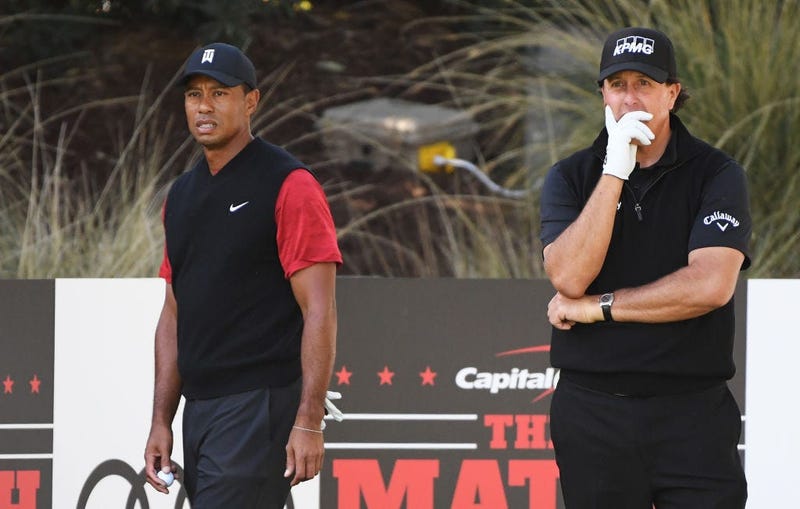 Photo credit Harry How/Getty Images for The Match
By Ray Ratto, 95.7 THE GAME

The first thing to be said about the entertainment alternatives we have been provided during the Big Q is that Tiger King is such a repellent show that all the characters who still live should be jailed for eternity, and those who have already passed should be dug up and killed again. In addition, anyone who worked on the show, produced it, touted it to others or thought it should be shared with the world should do time as well. Period. No trials, no appeals. Done.

And no, I don't want a discussion about this. If I wanted you to have an opinion, I would have assigned one to you in advance.

The second thing is that the proposed Tiger Woods/Phil Mickelson/Tom Brady/Peyton Manning televised golf outing is nearly as dreadful, even though the acronym TPTP (or TP2) can be momentarily soothing if only to remind us all of the good old days when toilet paper actually existed.

1. We saw Tiger v. Phil 1.0, in 2018 and it was monumentally, almost galactically dull. Plus it was pay-per-view, which meant you could measure America's revulsion. The match was years too late in the making, they repressed what personalities they do have to concentrate on the golf, and nobody asked for either of them to get back together at $39.95 a pop.

2. Brady and Manning are just there for football relief, a mashup along the lines of the mega-tedious Match Game-Hollywood Squares combination show in 1984 that ran one season and was roundly dismissed as the cheap non-idea it was. Brady has been militantly uninteresting in mass settings that include cameras, and Manning's connection to this is mostly because he did the same thing Brady did at about the same time. This is in short the QVC Channel of sports entertainment

3. The whole idea sounds like it was devised by 60-year-old television executives and agents who think the only audience to have is other 60-year-olds. I mean, sure it's just a cynical cash grab by lazy thinking suits, but it has the added advantage of lasting for six hours that will seem like 24 to anyone who decides to watch it all.

4. It tells everyone that social distancing and quarantine should only be enforced on the plebs, and that famous folks get to run free if paid enough. This fails as an example in every way unless the idea is as a middle finger to the rest of the nation.

5. ESPN has already cornered the pander-to-the-middle-aged market by hauling out the brilliantly definitive O.J. Simpson documentary and is rushing out a 10-parter on Michael Jordan that had better be at least as exhaustive and detailed if it isn't going to end up looking like one of those tedious NFL A Football Life hagiographies.

7. We have an inexhaustible inventory of unnecessary sports already at the ready, and I think the proposed Big 3 reboot/tournament has more validity even though it is guilty of the same old-folks-not-leaving-the-stage-gracefully. And that's while acknowledging that Woods and Mickelson are still creditable PGA Tour golfers who surely have earned our attention when the actual Tour resumes.

8. We also have an inexhaustible inventory of necessary and far more entertaining sports, in every imaginable sport, from Don Larsen's World Series perfect game and the Bird-Magic NCAA Tournament final to cornhole tournaments. The menu already weighs a metric ton.

9. Why don't the leagues show owners/board of governors meetings so we can see actual news being actually generated by actual 60-year-olds? I mean, we know why, but as every cooking show has proven, when you can't eat, watching the sausage being made actually is entertaining.

10. I don't want to seem unreasonable… well, yes I do. It's what I am. But I would accept even TP2 if it would guarantee me that my reasonable suggestion about Tiger King would be accepted in totality. This is a show that everyone who watched all seven installments will be mortified to have on their viewing resume as soon as next week, even more than watching the end of Game Of Thrones.

Which, by the way, also had animal mistreatment. I mean, those dragons went through hell just for doing the thing that dragons have always been bred to do — roast fleeing actors.