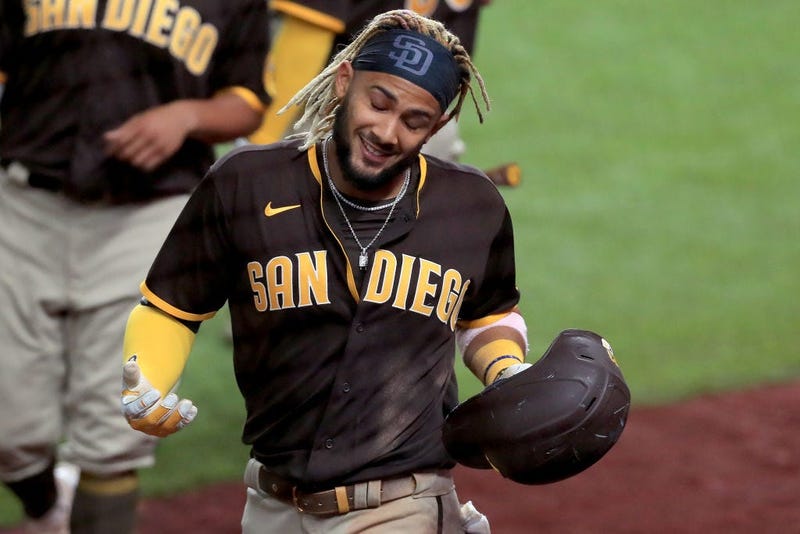 Fernando Tatis, Jr., the Mike Trout by any analysis, ignored a 3-0 take sign in the eighth inning of Monday's 14-4 debriefing of the Texas Rangers, which is not a good thing. You should always obey signs given from your manage or coaches.

But he hit a grand slam with the 3-0 pitch to give the San Diego Padres their 11th, 12th, 13th and 14th runs, which is a good thing because four runs for your team is preferable to none.

Then the Texas Rangers, angry at Tatis for ignoring said sign and swinging away in a game already well lost, brought in pitcher Ian Gibaut to throw behind the next hitter, Manny Machado, which is a bad thing and something the Rangers would deny doing even though that's what happened.

Then Tatis' manager, Jayce Tingler, nipped into Tatis' behind for missing the sign because a seven-run lead was deemed sufficient, which -- while not in and of itself bad -- is not exactly good, either.

And then the Internet did its usual batcrap crazy thing, because we're still more bored than the games available to us can fix. Yes, another "unwritten rules" debate piping hot and ready to serve.

It seems evident that Tingler can manage any way he wishes, but if he decides seven runs is plenty in a game that has already seen 13 scored, it won't take many bad endings to that thinking to change his mind. It seems clearer still that the Rangers failed to do the thing they were trying to do, which is walk Tatis, and they were angrier still that it cost them an additional 67 percent of deficit with only three outs available to them.

Really, if you want to fault Tatis at all, it’s for not fully understanding that baseball has secret rules you're supposed to just know could have gotten Machado a pitch upside the head.

So the solution clearly is to write all this stuff down:

# Seven runs is plenty, and you should stop trying because grand slams aren't as much fun as watching two teams agree to capitulate.

# If the manager says seven runs is enough, well, what does he know? Signs are just suggestions anyway.

# If a play doesn't go the way you want it to go (in this case, the execution of a fourth consecutive unhittable pitch), throw at the next guy that comes up because he did nothing except agree to play on the same team as the alleged miscreant. And then act like the aggrieved party.

See why these are unwritten rules? It's because if you type them out, everyone looks like an idiot.

Tatis' exuberance is something baseball needs more of, so maybe this isn't that big a thing. Somehow I suspect the nation would have ignored his home run because, well, Padres-Rangers, but what do I know? Still, signs are signs, and Tatis either should get better at looking down at third base coach Glenn Hoffman, or Hoffman should get better at making sure Tatis is looking at the signs.

The Rangers, on the other hand, have remedies for all their contributions to this nonsense, starting with manager Chris Woodward.

# Put Tatis on first base by telling home plate Nestor Ceja that you're putting him there. Ceja won't care. It's late, everyone's tired, nobody's up for an argument now.

# And if you're not sure Ceja, a young umpire, will get your drift, throw the ball three feet outside. Sure you'd be walking a player with the bases loaded, something last afforded to Barry Bonds by Buck Showalter, but if you're Woodward you shouldn't expect Tatis to fulfill your tactical aims for you.

# And having failed to get Tatis to obey your unspoken plan, leaving the dugout and yelling at Tingler, your protege, for not getting his player to understand rules that are so important that nobody has ever written them down, is at least a slightly better choice than bringing in a new pitcher to throw behind the next hitter's brain box with what MLB.com described as a 93.4 MPH four-seam fastball.

# And even if Gibaut did that on his own initiative or through non-managerial peer pressure, if Woodward doesn't want Machado thrown at, it is his job when making said pitching change to say clearly and concisely, "I wish for you to get outs, starting with this guy. I need no bench-emptying brawls in a 10-run loss where I might lose a good player in a fight that didn't need to be. Got it, Scooter?"

Instead, it's Unwritten Rule 3.7a, Unwritten Rule 5.1b-d, and Unwritten Rule 11.4r. It's expecting a 21-year-old not to try his hardest on the opponent's behalf, which frankly is genuinely insane, and then doubling down with a pitch to the helmet.

Now does everybody get why unwritten rules are stupid, and why "Well, you're just supposed to know that stuff" is a poor disciplinary model, and why "How else will he learn if I don't throw at another guy?" is even more idiotic?

No, I see why these are unwritten rules. You definitely want to keep thinking like this out of the public eye.