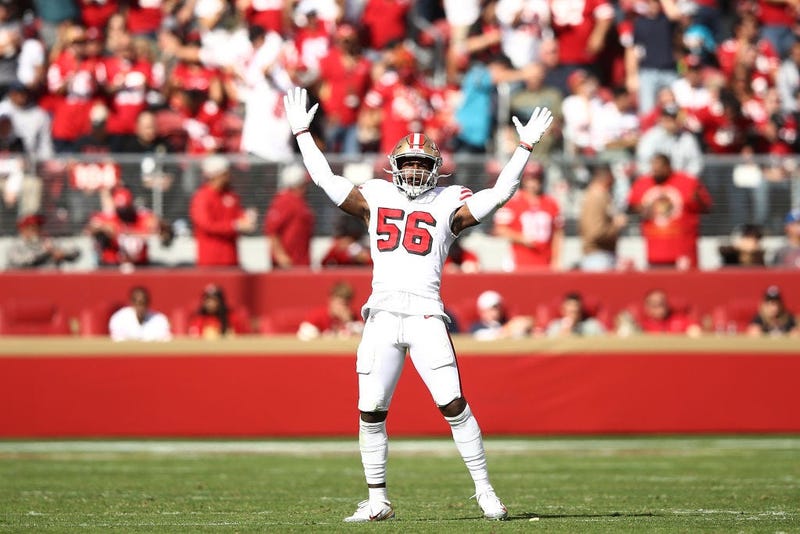 Although the 49ers beat the Arizona Cardinals 28-25 on Thursday Night football, the team suffered a loss that will last longer than any win. Linebacker Kwon Alexander tore his pectoral muscle late in the third quarter. The 49ers put Alexander on the injured reserve and pulled linebacker Elijah Lee up from the practice squad.

The 49ers have proven to be a resilient team after already dealing with several potentially crippling injuries. Joe Staley, Mike McGlinchey and Ahkello Witherspoon have all missed time.

Still, the 49ers have endured.

The 49ers will use players like Azeez Al Shaair, Dre Greenlaw and Lee to replace Alexander on the football field, but Alexander brings an attribute to the 49ers they simply can’t replace — swagger.

Alexander has served as the 49ers defensive hype man this season. Every great defense needs a wild man in the middle that brings a bit of energy and attitude. Alexander is that guy for the 49ers. San Francisco hasn't had a linebacker with a bite like Alexander's since Patrick Willis and Navorro Bowman.

What Alexander brings with his attitude might be the glue that holds the 49ers together. Young players are drawn to Alexander. He’s made the 49ers defense “legendary” while being the captain of “the hot boyz.”

The 49ers defense will now need someone to step up in the leadership department. Richard Sherman is one of the league’s best leaders, but there’s a different element to what Alexander brings. The focus should shift to younger players like Fred Warner, DeForest Buckner and Nick Bosa. All talented players, but each has a more stoic attitude.

-Fred Warner talks about how big of an impact Kwon Alexander had on the #49ers defense.-How he encouraged him to bring out his swagger.-How Dre Greenlaw just needs to be himself. pic.twitter.com/LAlFejQ7JE

Warner spoke about Alexander encouraging him to “bring that swagger out of myself.” Warner said everyone on the team feeds off of Alexander’s confidence. Warner will need to do his best impersonation of Alexander on Monday night in the 49ers’ biggest game of the season against the Seattle Seahawks.

Kwon Alexander has been a top coverage linebacker this season. He and Fred Warner will be tested this week against the @PFF_Panthers. pic.twitter.com/I39mDbnnaM

The 49ers now face a stretch of starting quarterbacks that will try to attack the hole Alexander is leaving behind. Russell Wilson, Kyler Murray, Aaron Rodgers, Drew Brees and Lamar Jackson are all still left on the 49ers schedule.

The 49ers will turn to Lee, Al-Shaair and Greenlaw to fill the shoes of Alexander. Lee is the eldest of the group at only 23 years old. Each will have to grow up quickly as the 49ers begin their toughest stretch on the schedule.